PUCK FAIR FESTIVITIES have been rumbling on in Kerry over the past few days – a tradition that’s been going on for at least 400 years.

Children play games, tradespeople and businesses set up market stalls, street performances take place across the city – and, of course, a goat is crowned king of the village (‘poc’ is the Irish word for a billy goat – hence the title King Puck).

The wild mountain goat is chosen by a farmer, who has it examined by a vet and domesticates it so that it’s used to people.

The Puck is crowned by the Queen of the Puck Fair who is a young girl from the local primary school; this year’s queen is Caitlin Horgan of Scoil Mhuire in Killorglin.

In the past few days, news agencies around the world have covered the unique and slightly bizarre tradition – including Reuters, India Times, Australia’s ABC News, and the New York Times. 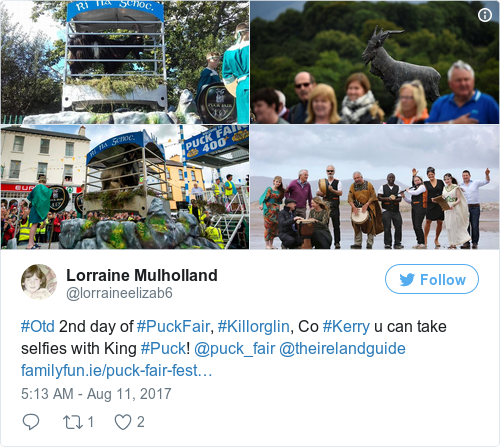 So what are the origins of the festival?

There’s no concrete answer, but the most popular one suggests that it began during the Cromwellian conquest of Ireland in the 17th century, to honour a wild mountain goat that broke away from its herd to warn the people of Killorglin of an impending attack.

This gave villagers a chance to prepare to defend themselves against an attack from the Roundheads, and so they celebrate the goat every year as thanks.

Another lesser known story says that the goat was used as a legal loophole by a young Daniel O’Connell. Around 1808 the local landlord, who must have annoyed British officials, was banned from collecting tolls for cow, horse and sheep fairs.

But O’Connell, who was a barrister at the time, said the law did not ban him from levying at goat fairs. So the fair went ahead as planned on 10 August, and a goat was hoisted high in the air to prove that it was indeed a goat festival.

The first mention of the festival was in 1613 when King James I issued a charter that granted legal status to the existing fair in Killorglin at the time.

When TheJournal.ie asked Declan Mangan who’s been chair of the Puck Fair for 30 years about the Cromwellian story, he said “it’s a good story and you can’t discount any of them”.

But he thinks the origins are much older and linked to the festival of Lughnasa, a pagan festival held on the 1 August that celebrated the harvest (a male goat was a pagan symbol of fertility). 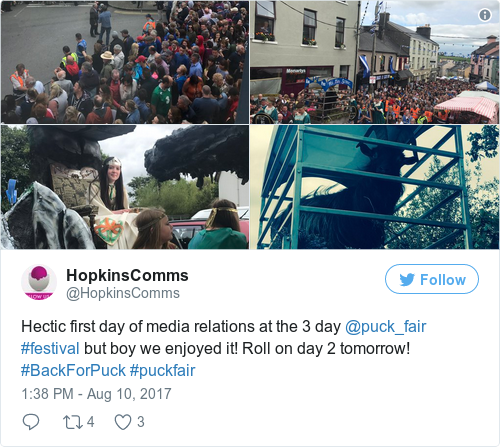 Hectic first day of media relations at the 3 day @puck_fair #festival but boy we enjoyed it! Roll on day 2 tomorrow! #BackForPuck #puckfair pic.twitter.com/fOACsLtkuB

We’re not the only country to celebrate the majestic goat either.

Mangan says there’s the story of a German town that run a herd of goats through its streets to remember a famine where the only source of food came from the goats.

“There’s the Lupercalia festival in Italy too, where the villagers all dress up as goats. They wanted to come this year but couldn’t accommodate it this time.”

Polish native Monika Dukarska, who moved to Co Kerry at the age of 16, said her hometown on Poznań also has a goat-themed tradition:

“The story goes that in the late 1500s, thunder hit the town and the tower was destroyed along with the town clock.

“To celebrate the refurbishment of the town hall, the mayor organised a gathering. A young cook unfortunately burnt the celebratory roast dinner, and instead of admitting his incompetence, he found two wild goats in a nearby field.

However, he didn’t manage to roast them as they fled the scene and climbed on top of the town hall and the clock. Although the goats were not as heroic as Puck, they provided great entertainment for those gathered in Poznań that day! 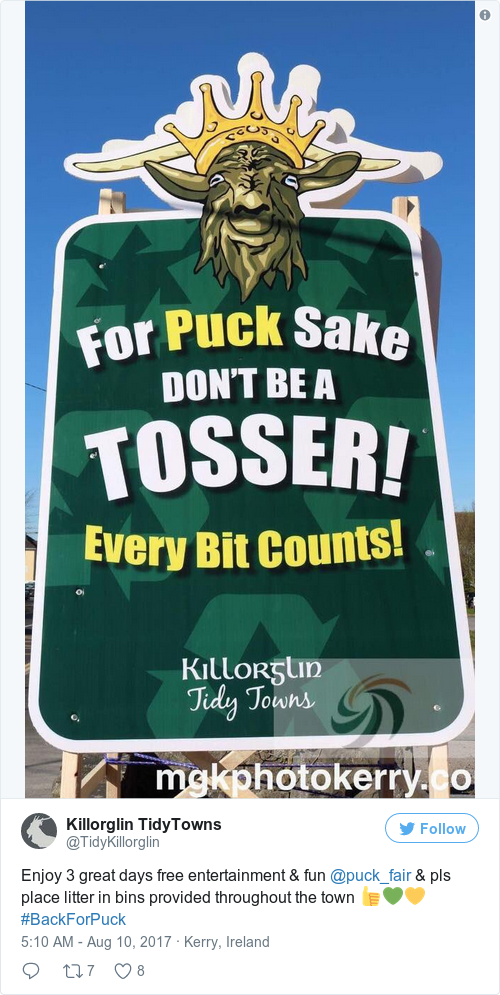 While the foundations of the Puck Fair’s traditions have remained, the festival has evolved over the years to include the horse fair, street performances, musical acts and children’s entertainment.

But there have been criticisms in recent years of the festival as cruel to the wild goats’ welfare. In 2015, animal rights group ARAN received threats after a protest to urged festival organisers not to hoist the goat into the air and confine him to a tiny cage for the three-day festival.

Mangan says that the animals are checked by a vet before, during and after the festival, but says he can’t answer whether those accusations will eventually put an end to the Puck Fair.

“Nobody knows. All I can say to that is, if animal welfare [groups] get mechanical horses to run at the Grand National, then you’ll get a mechanical goat at the festival.”

Read: This year’s King Puck has been picked… But what exactly happens at the Kerry fair?