THE FORMER CENTRAL Bank on Dame Street is set to get a new two-storey rooftop restaurant and viewing area – but it’s not the first time the roof of the building has been changed.

During its initial construction in the 1970s, the iconic building ran into trouble when 30 feet had to be taken off the top because it was in breach of planning laws.

Last week, planning was submitted to Dublin City Council to alter the award-winning building, which was designed by architect Sam Stephenson.

The building was acquired by Hines and Peterson earlier this year, following the Central Bank’s relocation to new premises on North Wall Quay. 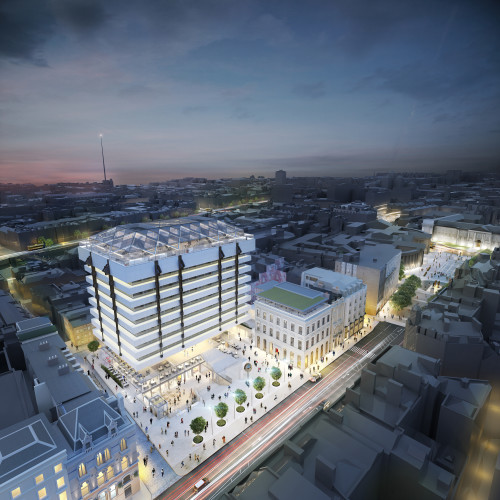 The redevelopment of the building is set to cost €75 million.

The proposal includes the creation of a new 20,000 sq ft rooftop venue with 360° views of the Dublin skyline within the building’s existing roof space. This would provide a viewing area and hospitality space for conferences, events and exhibitions.

The application is part of an overall plan that includes the adjoining properties 6-8 College Green, 9 College Green, and both the Annex and Commercial buildings on Dame Street.

Central Plaza has the potential to accommodate 1,000 office workers and create more than 300 full and part-time retail and hospitality jobs upon completion, Hines and Peterson said.

The iconic Dame Street building is a landmark in Dublin city, but it was mired in controversy before it was even built. 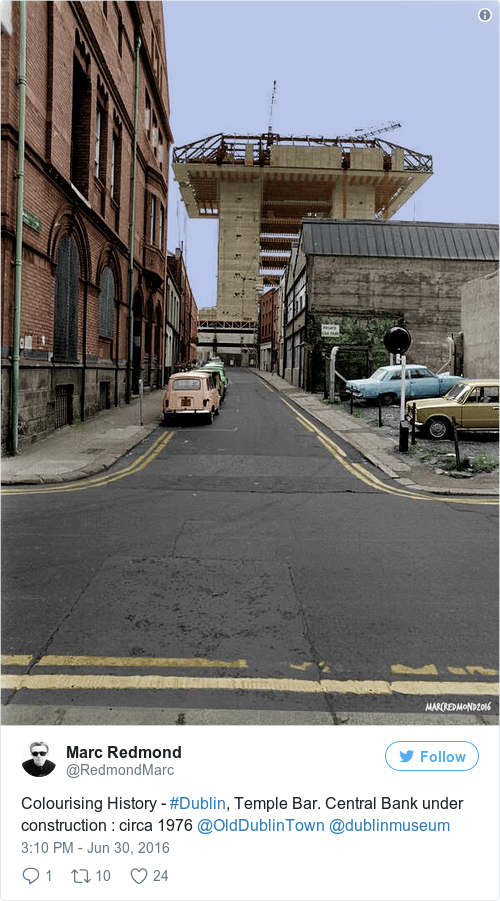 In 1969, Ireland’s Central Bank was refused planning permission to build the 15-storey office block in the centre of the city, just a stone’s throw from Trinity College.

According to RTÉ Archives, the Minister for Local Government, Kevin Boland, felt that the building would intrude excessively on the skyline and be out of scale with existing developments.

However, it was later granted planning permission, and construction began in the early 1970s. Dubliners watched on as the 150 foot building sprang up in the centre of the city.

The building was an unusual, modern design for Dublin in the 1970s. This documentary below gives a good insight into the various construction phases of the building:

Two concrete core tower pillars were constructed to support the office floors. The first pillar was built in just nine days, the second in under five days.

It took 500 cubic square metres of concrete and over 200 tonnes of steel to construct, with the help of a 160 foot crane – the largest that had ever been used in the city.

The concrete floors were then built, with the highest floor going up first.

According to Archiseek.com, each floor was built at ground level and then hoisted into place. 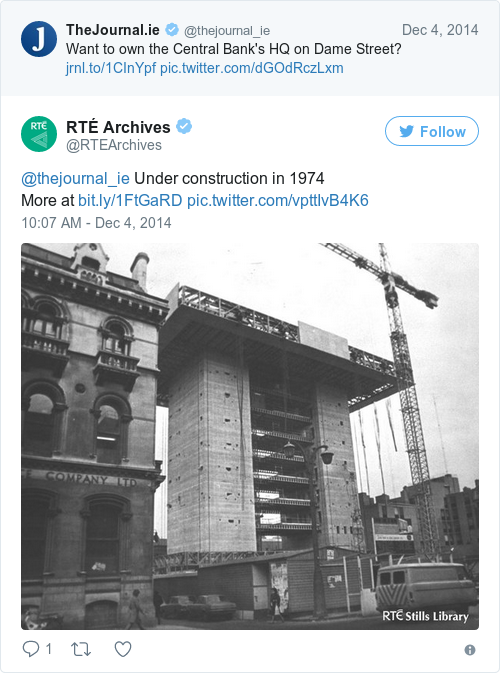 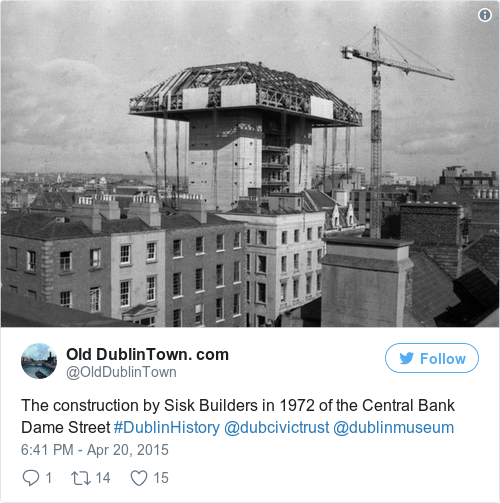 “I actually watched it being built from the bus stop across the road. I always felt, ‘I don’t want to go in there, because you would see it literally, floors being brought up from the bottom and being bolted into place and it just didn’t look stable. Obviously it is very stable as Stephenson got an award for it,” said Imelda Farrell, a Central Bank staffer, in a recent video (see below).

However, work on site halted in October 1974 when it was discovered the building had breached its planning permission and was too high.

In an interview with RTÉ on 24 April 1974, the then-Governor of the Central Bank, TK Whitaker, explained the extra height was necessary to carry extra loads. 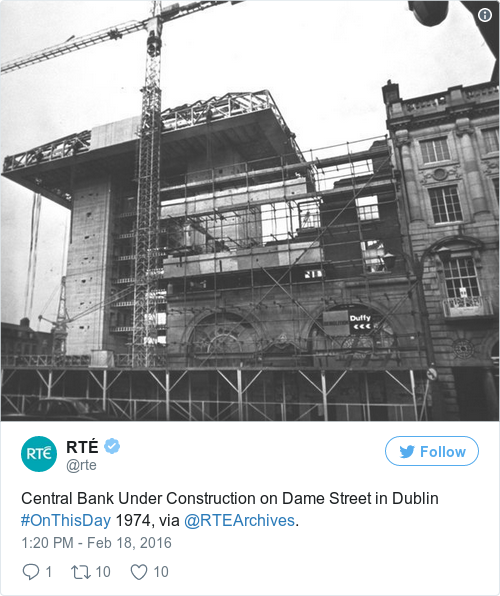 Central Bank Under Construction on Dame Street in Dublin #OnThisDay 1974, via @RTEArchives. pic.twitter.com/2zLSpZO7Mz

“If we are to reduce it, we have to get rid of this hanger idea and build in the conventional way from the ground up with separate supports,” he said.

After a two-year delay, work began again, but only after it cost an estimated €1.3 million to make major alterations to the design, including removing 30 feet from the roof of the building.

The Central Bank opened in its current location on Dame Street to much fanfare in 1975. Each floor got one IBM computer, and each main course in the restaurant cost just 66p. 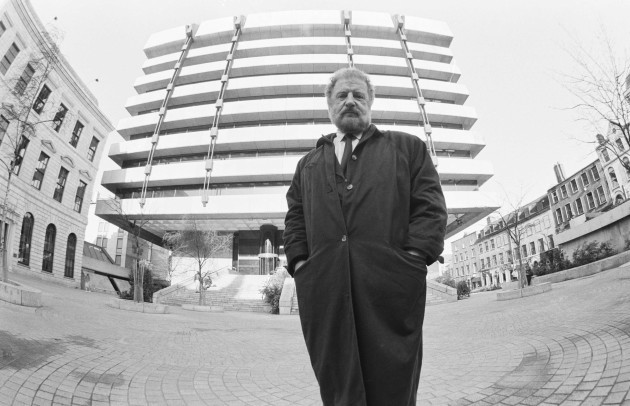 After 38 years, the bank left the Dame Street Campus this year, relocating to its new Docklands site (which was originally meant to be the new Anglo Irish Bank building) on North Wall Quay.

Works on the old Dame Street building have already begun, with the new rooftop venue with 360° views of the Dublin skyline expected to be a popular location. 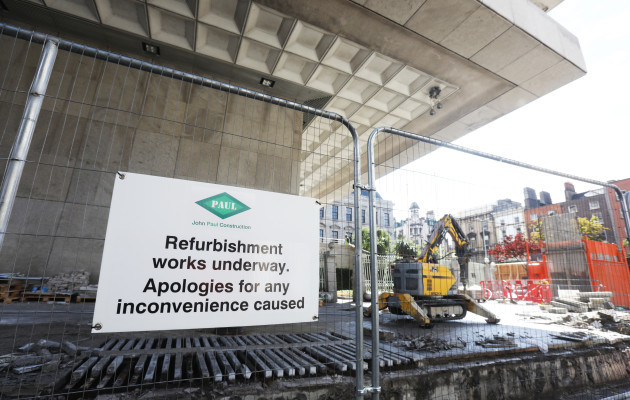 Construction work on the former Central Bank building in Dublin’s Dame Street It is to facilitate plans to create restaurant with a 360 degree view of the city.

Read: This is what the new Central Plaza in Dublin could look like>

Photos: Over 5,000 items from former Central Bank going on auction in huge sale>