BECAUSE THIS IS a Ryan Moore interview, it’s supposed to start with a brief history of how reluctant he appears to be when it comes to dealing with the media.

It’s supposed to mention that he seems to loath publicity and has a reputation for being difficult.

But, over the course of a 30 minute chat in the luxurious surrounds of Dublin’s Merrion Hotel, he’s none of those things.

Yes, the man many believe to be the best flat jockey in the world is quiet, and he does take his time over his replies, but only because he genuinely seems to want to give worthwhile answers; responses that are informative and useful, and not just throwaway clichés to fill the time until his media obligations are over.

Moore is in town to promote the Longines Irish Champions Weekend on 9 and 10 September in Leopardstown and the Curragh.

It’s a wonder he has the time though, given how in demand he finds himself.

“I have a busy week. I was in Deauville [France] on Sunday, Chelmsford on Tuesday, Leopardstown on Thursday, I’m over in Chicago on Friday, racing at the Curragh on Sunday and back in England on Monday.

“But they’re all good horses so I look forward to doing it. I’m fortunate I’ve a good team around me to help with everything.” 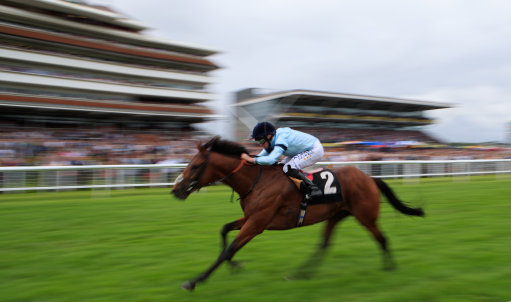 Moore is well used to winning.

Speaking to the 33-year old, you get a sense he’s not the type of person to post a “choose a job you love and you will never have to work a day in your life” meme on Instagram.

But it’s clear he loves his job, making the sacrifices worth it and even his time off revolves around horses.

“With the likes of summer holidays, I obviously don’t get to spend as much time as I should do with [my family]. But, with things like today, it actually works out very well.

“Two of the kids came with us and I knew I was going to be doing this stuff today so I brought them with me and brought them to the Dublin Horse Show.

“And because I’m riding at Leopardstown [Thursday] night, we’ll go back to the show again tomorrow.” 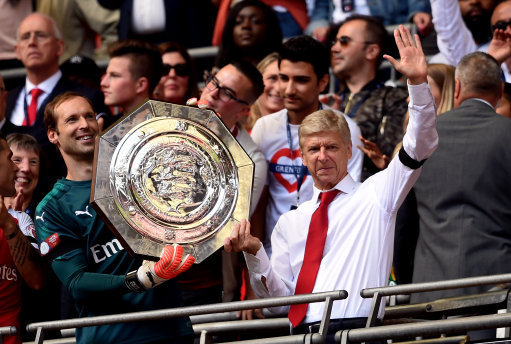 Moore is an Arsenal fan and, though he has tremendous self-belief when he’s in the saddle, he takes his time considering whether or not his opinion on the club is worth the HTML code.

“I always think that a lot of people have opinions that are irrelevant,” he says when asked if Arsene Wenger’s time at the club is up.

“And mine would be irrelevant on that. But I think he’s done a lot for the club and people should probably have a bit more respect for him, let the man do his job.

“I think that, if you support a club you should support what they’re trying to do and that means backing the manager and backing the team and I don’t think having hostility towards the manager is in any way a good thing.

“He wouldn’t be there that long if he wasn’t good at his job and I think people in this day and age find it too easy to give an opinion and, when it’s that easy to give one, it’s probably worthless.” 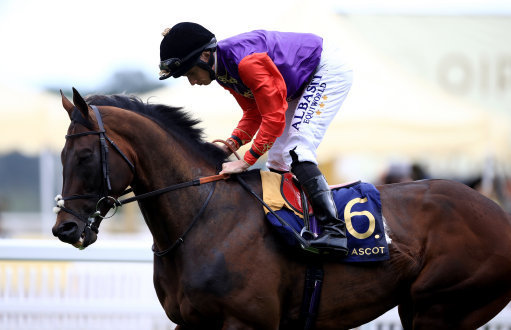 Moore (seen here in Queen Elizabeth’s colours) is believed to be the British monarch’s favourite jockey.

Football fans do express their opinions, worthless or not, quite a lot on social media. It’s something Moore avoids; good thing too as jockeys and footballers tend to get similar levels of abuse from punters talking through their wallets.

“I’m not really part of that,” he says with the look of a man content with his life choices.

“I use my phone just for phone calls still, I’m a little old-fashioned that way.

“Information is good but, unless you’re prepared to back it up face-to-face, I’m not sure you should say it online.”

That said, Moore is the type to treat triumph and disaster just the same so anything said on Twitter is unlikely to faze him.

“There’s another race every half an hour so you kind of have to forget the previous one and move on, whether it’s good or bad. There’s another job to do and you have to get back into the game.

“You can learn lessons from what happened in the past, of course, but you’d lose your head if you thought too much about it.

“Any day that things go right is a good day. I’ve won a lot of big races but I don’t really ever think of this day being better than that day.

“There are, however, many days in racing that are not so good but I try to stay fairly levelheaded about everything, I think you have to take the defeats the same as the wins.

“You can’t get too down and you can’t get too above yourself if you do win. I think it’s important that you try to bring the same level of performance to every day, every race. It’s not always possible to achieve that but I do my best.

“You want to be competitive and you have to go out there thinking your horse can win and not be daunted by the price. You then have to give that horse every opportunity to win.” 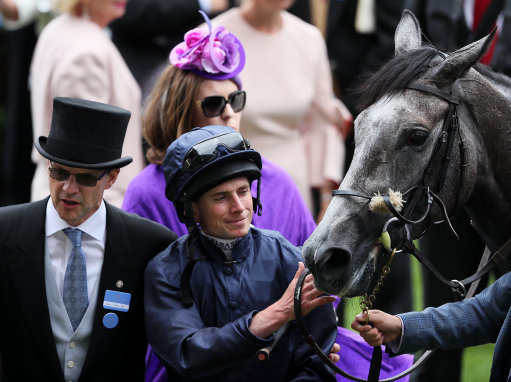 The trio of O’Brien, Moore and Winter have been unbeatable lately.

One horse that certainly makes the most of her opportunities is Winter.

The Aidan O’Brien trained filly has won four Group 1s this year — including the Irish 1,000 Guineas at the Curragh back in May — and is currently 20 points clear of Enable in the race for Cartier Horse of the Year.

She is scheduled to run at Leopardstown in either the Matron Stakes or Irish Champion Stakes on 9 September, and Moore is full of praise for the Irish horse.

“She’s a very powerful horse, very big and strong for a three-year old filly. She has a big long stride and finds plenty.

“I’d describe her as relentless really,” he says.

“On the good ones, you can always tell. She’s got more in the tank than most horses. I believe we’ve got a few others that are every bit as good as her but we won’t know where the ceiling is with her until she gets big.

“Over the last three years we’ve had some very good ones like Minding and Found and Seventh Heaven. They’ve all been good.

“I’m very lucky. All through my career I’ve ridden for great trainers and great owners who’ve been very good to me. I’m in a very privileged position.” 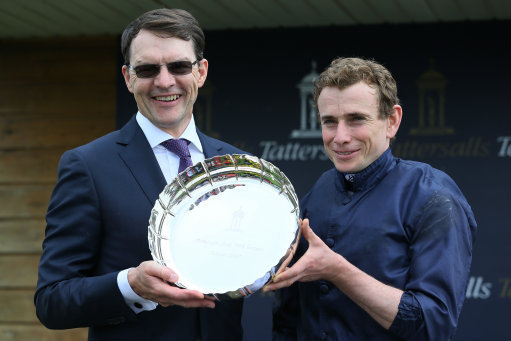 O’Brien and Moore after winning the Irish 1,000 Guineas with Winter.

That privileged position is as the number one rider for O’Brien’s Ballydoyle operation, but even Moore doesn’t know which horses are set to take part over the course of the Longines Irish Champions Weekend.

However, he’s hoping to have rides on Churchill and Order of St George — as well as the aforementioned Winter — over the two days.

One thing that is clear throughout the interview is that Moore is a massive fan of horse racing, and admits to watching national hunt during the winter when the flat season takes a hiatus.

That shouldn’t actually come as a huge surprise as his family have strong ties both training and riding national hunt horses while Moore himself has a 100% record over jumps.

Admittedly, that perfect record is one race as a 16-year old when he piloted Mersey Beat to victory for his father Gary at Towcester in May 2000 while waiting for the flat season to come around. 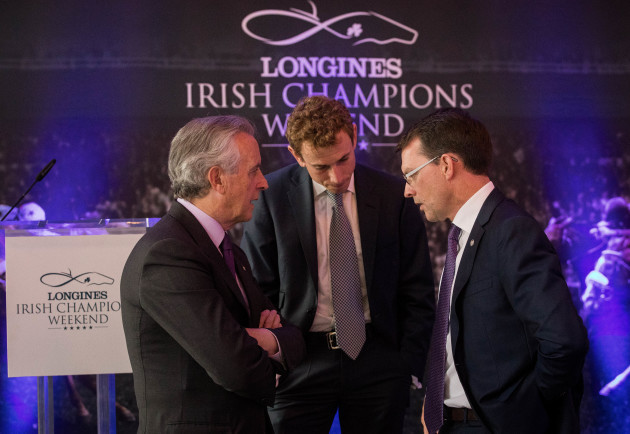 A penny for their thoughts at the launch of the Longines Irish Champions Weekend.

Moore is also keen to promote horse racing as being more than just a gambling endeavour and he believes that initiatives like the Champions Weekend — which is a relatively new feature on the calendar — are good for the sport.

“It’s hard to say what’s going to attract every individual person but I think it’s up to racing people to put on a good product and that extends from facilities, good places to watch the races, good food and drink at the right sort of prices.

“I think it’s important to get the basics right, then people are going to have a good day and that’s what it comes down to more than anything.” 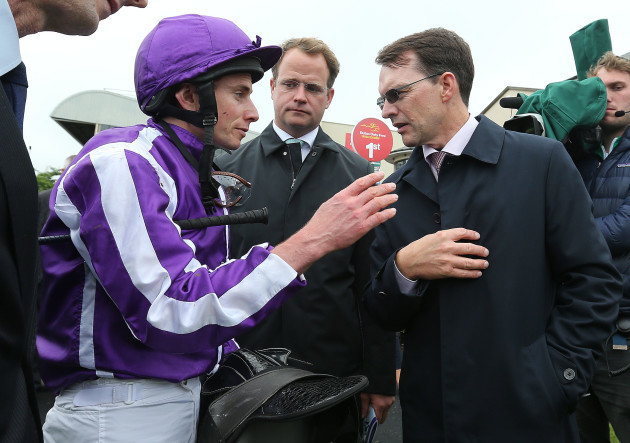 Moore would much rather talk to trainers and owners after the race before talking to media.

Racing does have its downsides, of course and it’s not just travelling.

For his race in Chicago, Moore needs to get down to eight stone, five pounds (53kg) or, to put it another way, less than the average weight of a 15-year old boy.

Having a sweet tooth doesn’t help, but he’s long enough in the game to know what he has to do to hit the mark.

The other part of the job Moore is nonplussed about is speaking to the media directly after a race. This is not him being difficult, however, but rather because, like the very start of our conversation, he’s not entirely sure what value it is to TV viewers.

“It’s something that a lot of people have their own views on and I understand where they’re coming from.

“I think it’s important to get what needs to be said across to the owner and the trainer because they are the ones who pay the bills at the end of the day.

“But I fully understand there’s a public out there that wants to hear things and everyone wants information and wants it quickly. Realistically you rarely learn anything of any value.

“To be fair, boxers have microphones shoved in their face right after being beaten up and footballers as well. Usually they’ll do an interview after a match but I can’t really remember thinking ‘I’ve learned something there.’

“It’s just one of those things I accept is going on but, if I’m watching it, I usually move on.”

He has a point too. There’s not huge scope for nuance on the back of a one tonne animal seconds after passing the post.

And while he does seem to prefer the chance to think about what he’s going to say, it doesn’t mean he’s considering a media career once he decides to hang up his riding boots.

“I’m not sure I’m what TV is looking for,” he says when asked about the possibility of following Tony McCoy into TV coverage.

Just this once though, Moore might be underestimating his own ability.

Ryan Moore was speaking at the launch of the Longines Irish Champions Weekend on 9 and 10 September in Leopardstown and the Curragh. For more information and for tickets, click here.