NEW CENSUS DATA released today shows that the time people spend travelling to work or school has increased across every county in the past four years.

The census area of Laytown-Bettystown-Mornington, three towns in Meath, had the highest percentage of commuters with 28% of its 4,565 workers travelling during the week. That was followed by Skerries in Dublin (1,092) and Greystones-Delgany in Co Wicklow (1,855).

The most popular modes of transport to get to work were: 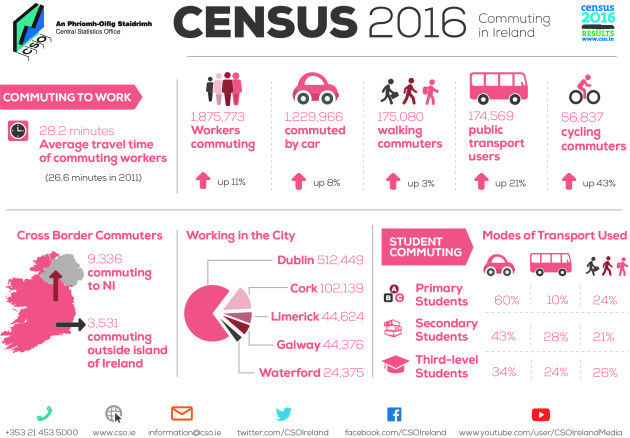 Among secondary school students, 43.3% went to school by car, while 28.4% used the bus. Over 42% of rural secondary students were reliant on the bus to get to school, compared to nearly 20% of urban students.

College students had a fairly divided spread; 23.5% drove or were passengers, 24% used buses to get to college, while 26% walked to college.

The number of workers crossing the border to Northern Ireland was 7,037 in 2016, up 10% from 2011. The number of students travelling across the border is at 2,299 for 2016, which represents a decrease of 26% on the previous census. Some 3,531 people stated on the 2016 Census form that their place of work was outside the island of Ireland.

You can read the full set of census figures on commuting here.

Census 2016: Nearly one in five homeless adults have a job

Read: The CSO has published an interactive map of where you will find the most single people