JIM MAGILTON GAVE a brutally honest assessment of Dundalk’s display, after they were beaten 5-1 by Bohemians at Dalymount Park on Monday.

A stunning Greg Sloggett strike proved little more than a consolation, while 20-year-old substitute Promise Omochere scored his first-ever Premier Division goal with virtually the last kick of the game to heap further woe on the beleaguered visitors.

Former QPR and Ipswich Town boss Magilton, who is currently Dundalk’s sporting director while also fulfilling the role of interim manager as they search for a permanent successor to Filippo Giovagnoli, made little attempt to hide his anger at the display.

He opted for the same starting XI that earned a surprise win over Shamrock Rovers on Friday, thereby ending the Hoops’ 33-match unbeaten run, but in hindsight conceded it may have been the wrong call.

“A bright opening and then, house of cards,” Magilton told reporters. “It just felt as if we were second best. They just picked up so many second balls.

“We looked leggy. We looked as if we were just going to turn up and we had a lesson in the basics of the game. That’s not acceptable. You can’t reach the standards of quality we reached the other night and then [collapse]. Maybe that’s where we’re at at this minute.”

Asked whether the poor performance was more down to character than ability, Magilton responded: “It has to be. It’s the same turnover for both teams. I asked a lot of questions and Bohemians didn’t do anything different from what I spoke to the lads about [prior to] the start of the game. We felt we had enough in our game.

“Maybe it was my fault. We put so much effort in the other night that I probably could have made changes, but I wanted consistency in selection and we just didn’t have it. We didn’t have the legs. We lacked the same sort of urgency and as a result, we got punished badly. Credit to Bohemians, they finished well. But the goals they scored are so cheap that it asked more questions of us than answers again.”

Pressed on why his team had performed so poorly on the night, he added: “I have no idea. Everything leading into this game, it’s about confidence. So it can’t have been a confidence thing. They played against the best team in the country [Shamrock Rovers], they went toe-to-toe with them, they win the game.

“And then they came out here and I expected us to present ourselves again and to play as disappointing as we did gives me another unbelievable opportunity to see and say ‘the character of the players’. And listen, things have got to change, it has to change.

“I’m responsible for standing out in front of you guys and taking responsibility for this, but once you cross the white line, I never, ever stood behind a manager [during my playing days]. If I was crap, I was crap, and I held my hands up and I’d come out and say that. I thought we were second best all over the pitch.”

Asked whether a poor attitude in the team was significant factor in the manner of the defeat, he said: “It has to be. You have to question that and you have to question character in our dressing room. That’s not acceptable. That’s just not acceptable at any level of the game. And I said that to these guys. If that sums up where we’re at, then there is a lot of work to be done.”

On the back of Monday’s dismal result, local journalist James Rogers then asked Magilton about the increased importance of avoiding defeat away to third-place St Patrick’s Atheltic on Friday, particularly with a two-week break before their next fixture at home to Waterford.

“They need to lift us,” he said. “The players need to lift us. You as a local journalist, me as a stand-in, the staff who give so much attention, they have to lift us. We can’t continually take responsibility. At some stage, these guys have to do it. They’ve shown that they are capable, that’s the most frustrating aspect of this. You can think after that the levels… And we got spanked today, we got absolutely spanked in every area of the game. We have to take it and come out and present ourselves and [produce] another really good game.” 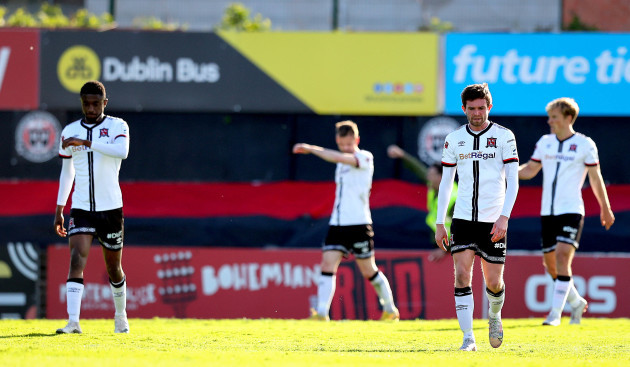 As sporting director, Magilton is regarded as the man primarily responsible for the recruitment of a number of new signings in the off-season, and the Belfast native suggested that some of the players are not good enough currently.

“We need a clear-out. This place needs a ridding, absolutely a ridding. You need to have good players who can handle that pressure of playing here and there is a certain degree of pressure. And you have to have players who can do that. And I think, at the minute, we don’t have them.”

Dundalk supporters made their unhappiness known on Friday night outside of Oriel Park in the form of a protest, though rather than the players, their anger was directed at the way the club has been run by American owners and chairman Bill Hulsizer. And Magilton acknowledged Monday’s performance will have done little to quell this unrest.

“That probably just accelerates it and inflames it and whatever else it does. But do you know what? They [the players] have to look at themselves. They have to come out now and stand up and be counted, and we’re going to find out sooner rather than later. The one thing about football is you get more chances. They have shown in one-off games that they can raise the bar. But of course, we don’t do it enough.”

And does he feel the club’s increasingly perilous position will make it more difficult to attract a permanent manager?

“It doesn’t. It probably makes it easier because people will look at the group and go: ‘Do you know what? I can do better, and I can do this and that.’ I had it. I had a phase where I looked at Queen’s Park Rangers, and thought: ‘If I had this squad every day, they’d be bang at it.’ So I know the temptation. And there will be plenty of managers out there who will relish that opportunity.”

Questioned whether Monday was one of the worst nights of his career, Magilton responded: “It’s up there, yeah. Of course it is. It’s not easy to take it. Are they a reflection of me and my character? I’d like to think not. They say teams reflect their manager. If that’s me, then I’m in a dark place. Let me tell you, I’ll be looking at myself tonight and thinking that I must not be who I think I am. So listen, it’s a tough one, and I appreciate your kindness here. You could have been a lot more ruthless. But it is where we’re at, and we’ve got to go again.”