THIS ABC NEWS report from 21 August 1979 is being shared widely online because of the message it contains about the world of 2017.

The report is about a total solar eclipse crossing North America – the same type of eclipse which will occur on Monday.

At the end of the broadcast, the presenter Frank Reynolds says:

So that’s it, the last solar eclipse to be seen on this continent in this century.

And as I said, not until August 21st 2017 will another eclipse be visible from North America.

May the shadow of the moon fall on a world of peace.

The message, understandably, has gotten much traction online given the news events of the past year, and in particular the week that has passed.

Reynolds’ wish for a peaceful world did not come true. 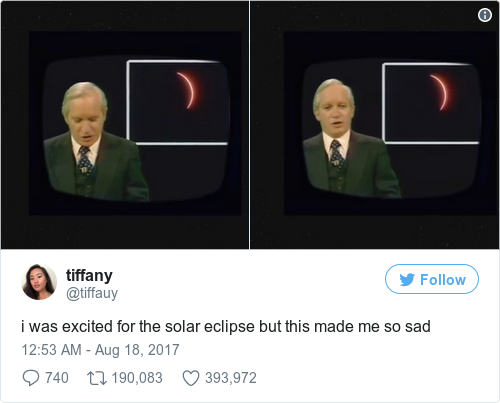 i was excited for the solar eclipse but this made me so sad pic.twitter.com/jjDiLY1Owq 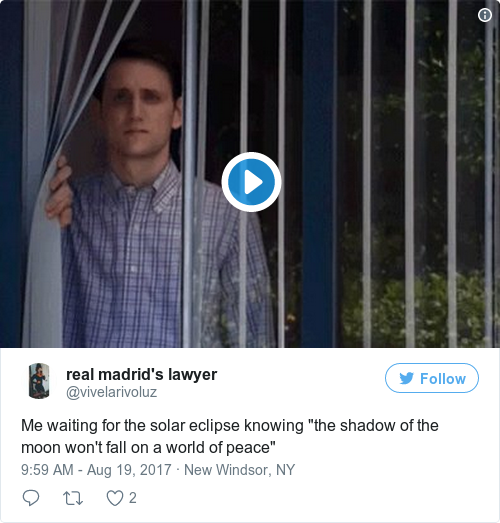 We may have missed the objective to be a world at peace by this eclipse but let's never stop striving to achieve peace for the next one https://t.co/63DQ3OIDwN

On 21 August 2017, the first location to be plunged into complete darkness during the solar eclipse will be in the middle of the Pacific Ocean.

Then the moon’s shadow will be seen crossing the sun in Oregon, before it travels across to South Carolina.

Read: The United States is about to experience the best eclipse in a lifetime… but how long does Ireland have to wait?>