IN AN ERA where social media is awash with “experts” on every subject, it’s hard to block out the negative voices.

But one person who isn’t going to try and fight against the “fake news” is Ireland Womens’ head coach Tom Tierney — despite all the recent negative press.

At their home World Cup his time have struggled — squeezing past inferior sides Australia and Japan before being eliminated from semi-final contention with defeat to France last Thursday.

They will play in a semi-final, against Australia again, however it will only be for a shot at the fifth-placed play-off.

And in the build-up to the game, with plenty of pressure on his shoulders surrounding whether he will still be in the job by the end of the year, Tierney says he’s not paying any attention to what others have to say.

“I’ve got 21 years experience of being a professional player and coach under my belt, and it’s all part and parcel of the job,” he states.

“It’s not about me, I have a job to do and I understand the media have a job to do as well. It is what it is, but as long as the players aren’t affected and they can do their jobs then I’ve done my job as a coach.” 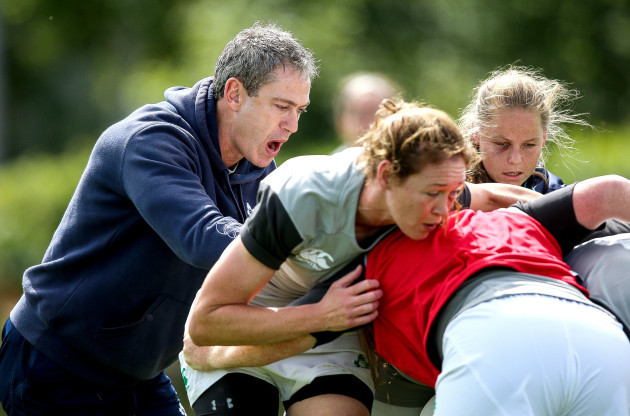 “The plan going forward is put structures in place for the domestic game.”

So, what now? The coach himself admits the game against the Wallaroos is not where they want to be, so inevitably thoughts have to turn to the future and how to get Ireland back into the proper semi-finals.

It won’t be this year, and it may not even be Tierney who will attempt to lead them back to the promised land in 2021. But he believes that the foundations are there for the future.

“We’ve brought through a lot of good players, a lot of young players who are learning the game, which is great for the women’s game going forward,” the coach said.

“And that’s the plan going forward, to unearth and to create structures in place for the domestic game.

“This World Cup has shown the women’s game is getting bigger and bigger, and there’s going to be a huge emphasis on the skill levels and the fitness levels of players, and players being athletes, and that’s the challenge for us.

“The key will be to put structures in place for the domestic game, and the enthusiasm from people to get involved has given us the basis to build on.”

And, even if the game isn’t exactly a marquee event, Tierney does confess the squad are looking forward to playing the Australians in front of a crowd of around 10,000 at Ulster’s Kingspan Stadium.