JUST ONE IN every 10 GPs in Ireland are offering medical abortions, a research paper authored by a doctor and commissioned by the National Women’s Council has found.

There is no GP provision of abortion care in Sligo, meaning women may have to travel a round trip of up to 100km, to Donegal or Roscommon, to access a GP twice, three days apart with the possibility of a third visit if a scan is required.

The research has been published today, on the third year since the vote to repeal the Eighth Amendment, and ahead of a Government review of Ireland’s abortion services.

Irish couples who have received a diagnosis of a fatal foetal abnormality are among those still traveling to the UK to access abortions, despite Ireland’s newly-liberalised abortion laws. Campaigners are calling for rules to be relaxed to care for Irish citizens here.

The National Women’s Council of Ireland and other women’s advocates have said that the 12-week limit leaves a “tight window” between when women realise they’re pregnant, and when they can access an abortion (up to 12 weeks for non-medical reasons). 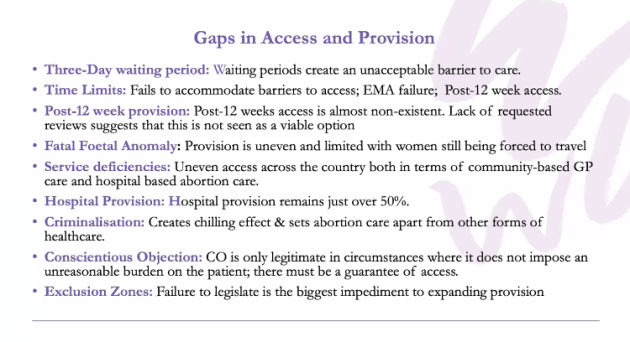 Almost a year after the Eighth Amendment referendum vote, The Journal reported that just 10 out of 19 maternity hospitals and units across the country had fully implemented new abortion services.

The National Women’s Council of Ireland report published today states that this figure has not changed, and just 10 maternity hospitals and units are still offering acute abortion services. 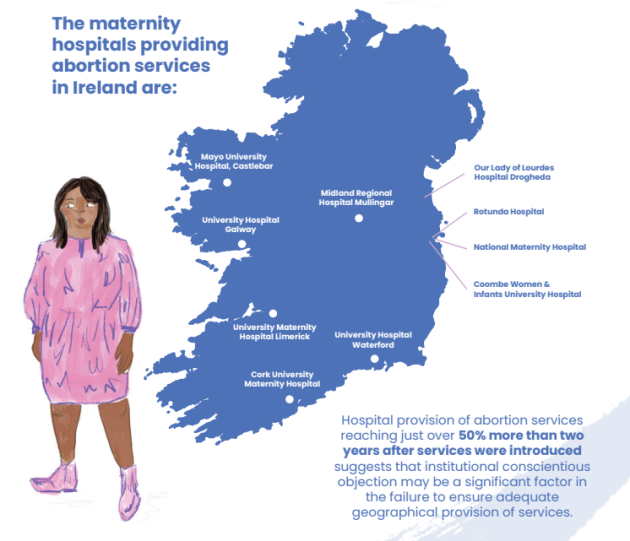 Early medical abortions are accessed through GP clinics if the pregnancy is under 10 weeks. Pregnancies at 10-12 weeks, and those with some medical conditions, require acute care at hospitals or maternity units.

The NWCI report states today that as of April last year, 373 GPs had signed contracts with the HSE to provide early medical abortions (EMA), and medical professionals who took part in this research suggest this has increased slightly to around 385 providers.

The Irish College of General Practitioners, estimates that 3,496 GPs are actively practising in Ireland, leading the report to conclude that just one in every ten GPs is an abortion care provider.

“I don’t think we hear enough about conscientious provision,” said Dr Sinéad Kennedy, the author of the review into Ireland’s abortion care services.

As of April 2019, around 317 GPs had signed up to provide abortion services, while 169 were publicly listed through the MyOptions helpline. If a woman calls that helpline to look for a GP that offers the service, they will be told where the nearest GP clinic is.

A decision was made to make participating doctors’ details only available by calling the My Options helpline, rather than publishing a list of their names in order to minimise the targeting of individual doctors by anti-abortion activists.

Dr Mary Favier said that hospital provision is “very problematic” and GP care “could be improved”. She added that the 10 out of 19 hospitals providing full abortion services was “discriminatory” for women who don’t live in those areas.

DR Favier said that the 21-week limit is “downright cruel”, and that GPs are always up against the timeline of 12 weeks when administering abortion care, as it takes 2 weeks to see if the medical abortion was successful.

She said that a shortage of GPs and recruitment issues in hospitals could be hampering those areas offering full abortion services.

30.06.20
6,666 abortions carried out last year under laws enacted after repeal of Eighth Amendment

‘Ireland is an outlier’

Leah Hoctor of the Center for Reproductive Rights said in response to the publishing of reports that the sanctions facing doctors if they administer abortion care outside of the legislation is having a ‘chilling’ effect on their administration of abortion care, and is contrary to World Health Organization guidance.

“Ireland is a significant outlier in the extreme severity of the sanction” that doctors who offer abortion care outside the provision of the Termination of Pregnancy act.

Ireland was one of the first countries to offer telemedicine abortion care during the Covid-19 pandemic, Hoctor said, with France and the UK following suit. She added that this trend should continue.

The figures for last year should be published next month. 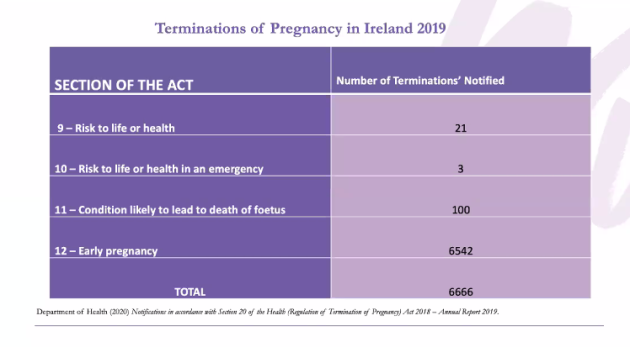 Abortion services are free for women in Ireland; GPs are reimbursed €450 per pregnancy termination, which includes three appointments, and pre- and post-care.

Orla O’Connor, director of the National Women’s Council of Ireland, told RTÉ today that “women’s experiences need to lead this review” into abortion services that the Government is due to carry out this autumn, and that an expert in reproductive healthcare should be the author of the review.

She said that based on women’s experiences, it is harder for women in rural areas to access abortion services. She said that the 12-week limit was also problematic, as many women don’t realise they’re pregnant until they are around 10 weeks pregnant.

When asked whether extending the 12-week limit was problematic for those who voted in the referendum on the basis of it being a 12-week limit, O’Connor said: “I think the Irish public don’t want a situation where women are forced to travel.”

Irrespective of conscientious objection by medical professionals, she said that the Government has an obligation to meet that need of providing abortion care.

“Women who have made a considered decision about their pregnancy endure stress, anxiety and delay because of the mandatory waiting period,” he said.

Our clients include women who had to travel abroad for abortion, even during the pandemic, because their pregnancy fell outside the gestational limit and the eligibility criteria after 12 weeks of pregnancy.

People-Before-Profit TD Bríd Smith today raised the issue of ‘safe’ or exclusion zones outside hospitals providing abortion care, saying that they need to be looked at again. Disability activist Nem Kearns, who raised additional obstacles for those with disabilities in accessing abortion care, said that exclusion zones were particularly important.