AT 6PM THIS evening (Irish time), tickets will officially go on sale for the super-fight between Floyd Mayweather Jr and Conor McGregor.

The decision by the most successful boxer of his generation to agree to step into the ring with the UFC lightweight champion has polarised opinion among fans of combat sports as Dubliner McGregor will be competing in his professional boxing debut in Las Vegas on 26 August.

Regardless of whether you view it as a cynical money-making freak show or a legitimately-intriguing match-up, the bottom line is that people will be tuning in en masse to see how it unfolds. 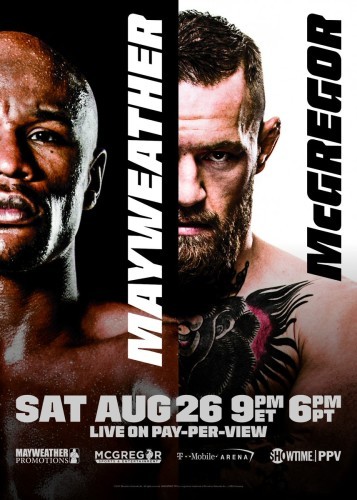 It’s expected to break pay-per-view records and earn both men in excess of $100 million, but those actually hoping to attend the fight have quite the job on their hands.

The Irish have always travelled in their droves to support McGregor and this will be no different.

Located on the Vegas Strip, the recently-opened T-Mobile Arena hosts the event in a month’s time and it holds a capacity of 20,000 for boxing and MMA nights.

However, only a fraction of those tickets will go on general sale and you will have to pay through the nose even if you are one of the lucky ones.

Tickets are being sold through Ticketmaster.com and there is a limit of two per-person.

Hopeful fans must register on Ticketmaster first and they are also recommending that you become a #VerifiedFan.

The super-fight between boxing’s Floyd “Money” Mayweather (49-0, 26 KOs) and UFC Champion “TheNotorious” Conor McGregor (21-3 MMA, 18 KOs) is one of the most anticipated bouts in history and there are going to be more fight fans who want to be there to witness it in person than there will be available tickets,” say Ticketmaster.

“One thing both fighters can agree on: they’re committed to getting tickets in the hands of fans. Not scalpers or bots. Mayweather and McGregor are collaborating with Ticketmaster to use the #VerifiedFan platform to power their ticket release to KO bots and scalpers so more fans get access to tickets.”

Online resale sites have already been claiming to sell tickets for extortionate prices but UFC president Dana White warned fans about being conned into purchasing fakes.