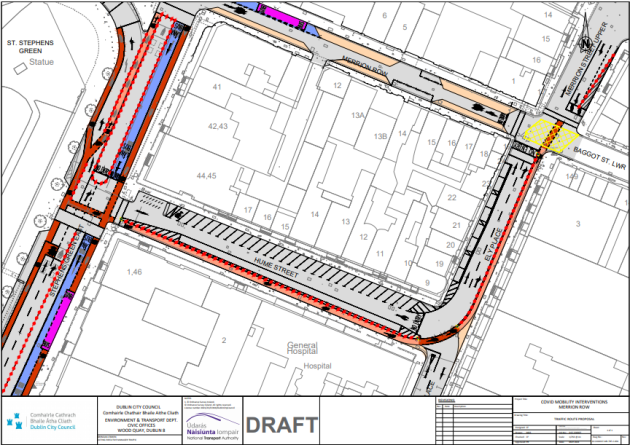 Drawing of the changes planned for three city streets.

THREE STREETS IN Dublin south city centre will have traffic changes brought in from today to help facilitate outdoor dining in the coming weeks.

Dublin City Council said the measures will be in place initially for the summer months, with a review due in autumn to look at continuing long-term.

Outdoor service at bars and restaurants can resume from 7 June under plans approved by the government on Friday.

From today, the direction of traffic on Hume Street and Ely Place will be reversed, so traffic from St Stephen’s Green East will use these streets.

The footpaths on Merrion Row have been widened with one lane of traffic coming from Kildare Street.

A contra-flow cycle lane will be brought in for Ely Place and Hume St. Cyclists will still be able to access Merrion Row and St Stephen’s Green East.

People will still be able to park on Hume St, but perpendicular parking will be changed to angled parking and parallel parking will move to outside the new cycle lane.

Eight parking spaces will be removed on the east side of Ely Place, but 90% of the spaces on Hume Street and Ely Place will remain.

There will be no changes to parking spaces for people with disabilities.

The council said it is going ahead with these changes after a trial showed the impact they had on the local area.

A recent public consultation, which received almost 2,4000 submissions, showed 93% of respondents in favour of the proposals.

Four popular streets in the south of the city centre were also mostly pedestrianised from earlier this week.