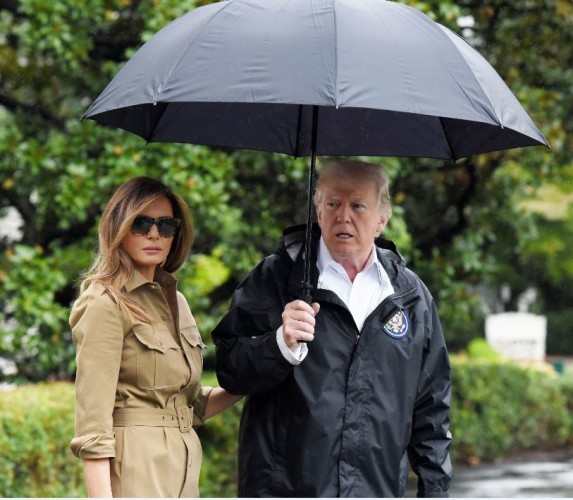 US PRESIDENT DONALD Trump arrived in Houston today to witness the devastation caused by Hurricane Harvey, which pounded America’s fourth-largest city with apocalyptic floods that killed dozens and wrecked homes and businesses.

The sprawling Texas megacity was taking tentative steps back to normalcy after a week of acute flooding that damaged 40,000 to 50,000 homes and sent tens of thousands fleeing to emergency shelters.

The White House has asked Congress for $7.85 billion (about €6.6 billion) for Harvey-related “response and initial recovery efforts”, calling it a “down payment” on the long-term cost of recovering from the record flooding.

Harvey has been blamed for at least 42 deaths so far and tens of billions of dollars of damage.

Trump and First Lady Melania landed at a Houston air base earlier today and were whisked off in a convoy of dark SUVs accompanied by a delegation that included Texas Governor Greg Abbott.

At the city’s Convention Center, which was turned into a shelter for thousands at the peak of the crisis, University of Houston cheerleaders and the college’s furry cougar mascots stopped by to lift the spirits of evacuees.

“We’re here to hang out with the kids, to cheer people up,” one of the students in the group said, as evacuees waiting in line for federal aid vouchers waved and took photos.

Trump is returning to Texas for his second visit since the megastorm hit, and will also visit neighbouring Louisiana later today.

On Tuesday, Trump stopped in the coastal city of Corpus Christi and the state capital of Austin. He has declared tomorrow a national day of prayer for victims of Hurricane Harvey. 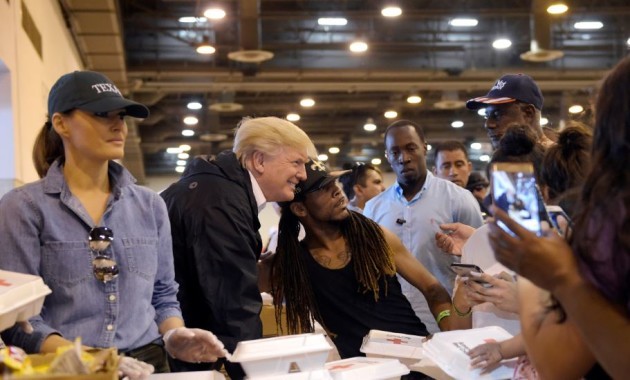 The Trumps meeting people impacted by Hurricane Harvey in Houston

As floodwaters are receding in Houston, nearby cities such as Beaumont — which had lost its water supply — and Port Arthur are struggling to recover.

One week after Harvey slammed into southeast Texas as a Category Four hurricane, rescuers were still out searching for people inside flooded homes.

The White House’s request for nearly $8 billion (about €6.7 billion) in emergency storm aid — made in a letter sent to House Speaker Paul Ryan yesterday — was $2 billion (about €1.7 billion) more than what the White House was expected to request, suggesting a rapid rise in needed funding as the scale of the disaster becomes clear.

White House budget director Mick Mulvaney, who said the administration would later be seeking an additional $6.7 billion (about €5.6 billion) for disaster relief, called on Congress to lift the US debt ceiling, warning that otherwise the outlays could be affected.

Meanwhile, rescuers in Port Arthur are still evacuating residents who refused to leave their homes during the storm. 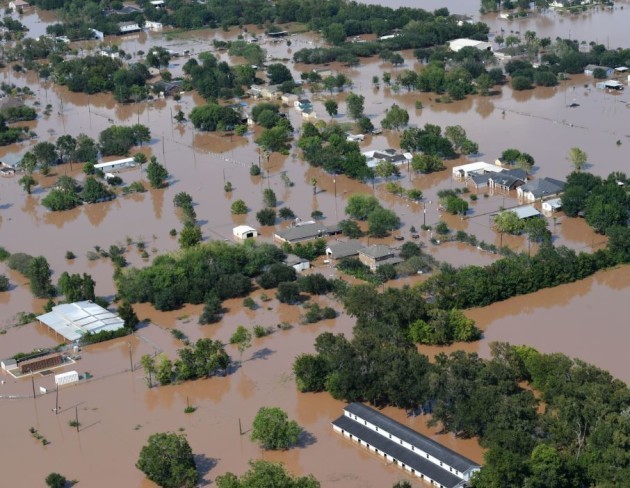 Jonathan Caldwell, a former police officer, said he and some friends rescued about a dozen people in one flooded neighbourhood yesterday.

“We had little ones on our shoulders, wading through chest deep water this morning,” he said.

Houston Mayor Sylvester Turner said most of the city was “now dry”, but urged residents living near two overflowing reservoirs to leave their homes.

Officials said most of the 15,000 to 20,000 residents have left. Some however are holding out – straining emergency workers who have to maintain services to them, including providing them with water.

There was a bright spot for Houston this weekend, as the Astros, the city’s major league baseball team, will be home for games.

The Astros abandoned their stadium this week for three games in Florida against the Texas Rangers.

“We hope that these games can serve as a welcome distraction for our city that is going through a very difficult time,” Astros president Reid Ryan said. “We hope that we can put smiles on some faces.”

They will host a game against the New York Mets today.