TEXAS IS BRACED for a renewed battering by Hurricane Harvey and President Donald Trump – facing the first major natural disaster of his presidency – declared a state of emergency in neighbouring Louisiana this evening.

Trump plans to go to the disaster zone tomorrow and aides said he has been constantly in touch with federal and state officials involved in the response.

Speaking this evening, Trump said: “It’s a historical amount of water, we’ve never seen anything like it.”

Rescue teams in boats, trucks and helicopters scrambled today to reach hundreds of Texans marooned on flooded streets in and around the city of Houston today before the storm returns. 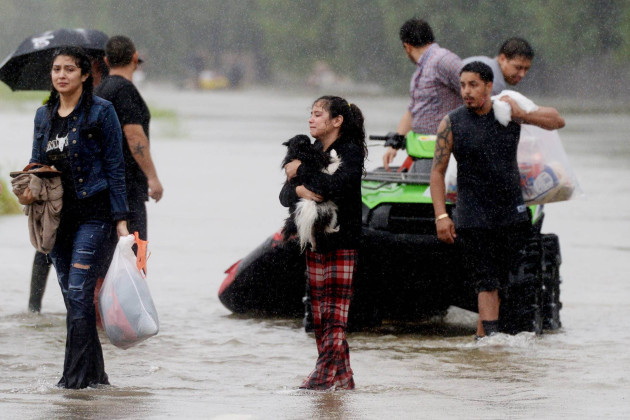 Thousands are pushed out of their homes following the vicious storm.

“We thank our first responders and all of those involved in the efforts. We’ve pledged our full support as Texas and Louisiana battle and recover from this very devastating and historic storm,” Trump said today.

“Recovery will be a long and difficult road and the federal government stands ready, willing and able to support that effort.”

According to reports by local media outlet KHOU, six people drowned in floodwaters in north-east Houston today, while two others were confirmed dead over the weekend.

Harvey has turned back on itself and is hovering on the Gulf Coast, sucking up more rain and threatening a new landfall on Wednesday.

Houston mayor Sylvester Turner has said more than 2,000 people had been brought, soaking and desperate to rapidly filling shelters in America’s fourth largest city – and more are yet to come.

“The goal is to rescue, that’s the major focus of the day,” Turner said, flanked by grim-faced city officials at a televised press conference, warning that 185 “critical rescue missions” are still pending and many more are expected. 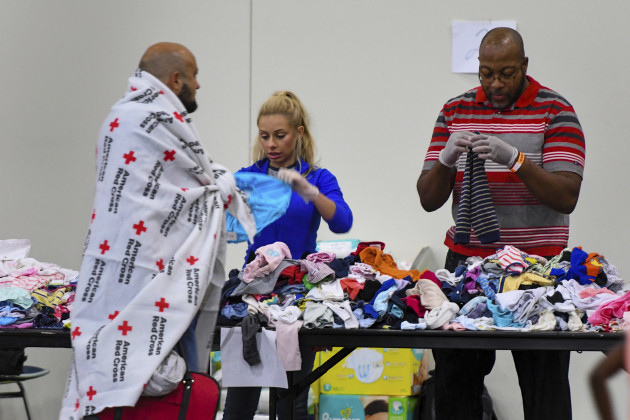 George R Brown Convention Center in Houston has been turned into an emergency shelter.

Houston fire chief Samuel Pena urged patience, promising: “We fully recognize there are many other people out there in distress situations and we intend to get to every one of them.”

Coast Guard commander Vice Admiral Karl Shultz told CNN that he had 18 helicopters in Houston, and weather permitting about 12 in the air at any one time, alongside those of the National Guard.

“If you can get to your roof, wave a towel. Leave a marking on the roof so helicopter crews can see you,” he said, describing the volume of emergency calls as “staggering”.

Harvey hit Texas on Friday as a Category Four hurricane, tearing down homes and businesses on the Gulf Coast before dumping what meteorologists said was an “unprecedented” nine trillion gallons of rainfall inland.

The Texas bayou and coastal prairie rapidly flooded, but the region’s sprawling cities – where drainage is slower – were worst hit, with highways swamped and street after street of housing rapidly rendered uninhabitable, power lines cut and dams overflowing.

The US Army Corps of Engineers today moved to progressively open the Addicks and Barker dams – under pressure from what the agency has dubbed a “thousand-year flood event” – to prevent a catastrophe on the outskirts of Houston. 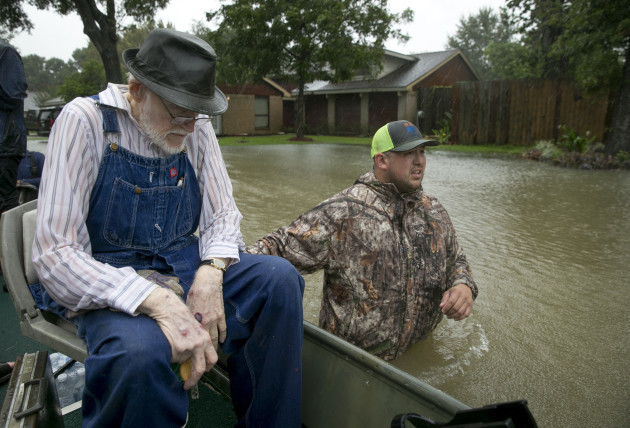 Bobby Nelson (78) is rescued from his flooded home.

After the storm hits again later in the week, clean-up and recovery will continue.

“We actually anticipate that as many as a half-a-million people in Texas will be eligible for and applying for financial disaster assistance,” Vice President Mike Pence told KHOU Radio in Houston.

“We know it’s far from over. We know there’s more rain coming. The flood waters will likely continue to rise,” he warned. 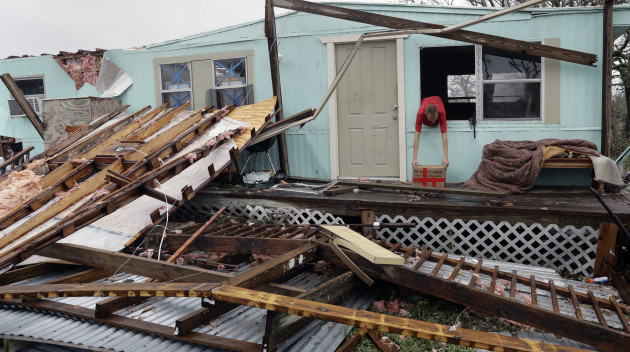 Hundreds of houses were destroyed as Hurricane Harvey ravaged through Houston

Federal Emergency Management Agency (FEMA) administrator Brock Long said finding shelter for those flooded out of their homes would be his next priority.

“This is a landmark event. We have not seen an event like this. You could not dream this forecast up. You couldn’t draw this situation up,” he warned.

The National Weather Service said that between 1 June and Sunday, Houston had received 46 inches of rain – almost as much as it would expect in a year – in only three months.

“The breadth and intensity of this rainfall are beyond anything experienced before,” the NWS said, as the storm spawned tornadoes and lashed east and central Texas with torrential rains.

Boats also were being deployed, but more were needed. Harris County Judge Ed Emmett appealed to residents to use their own vessels.

While many citizens rushed to help their neighbours, some were less helpful, and Houston police chief Art Acevedo warned that his officers were on the lookout for looters.

Read: ‘We are all safe!’: Break in hurricane allows Carlow teenager to get urgent cancer treatment

More: PICTURES: The devastation wrought by Hurricane Harvey on Texas