US PRESIDENT DONALD Trump took no responsibility for his part in stoking a violent insurrection in Washington last week, despite his comments encouraging supporters to march on the Capitol and praise for them while they were still carrying out the assault.

“People thought that what I said was totally appropriate,” Trump said during his first appearance in public since the Capitol siege, which came as lawmakers were tallying Electoral College votes affirming President-elect Joe Biden’s victory.

Tump arrived in Texas to trumpet his campaign against illegal immigration in an attempt to enhance his legacy with eight days remaining in his term, as lawmakers in Congress appeared set to impeach him this week for the second time.

In Alamo, Texas, a city in the Rio Grande Valley near the US-Mexican border — the site of the 450th mile of the border wall his administration is building, Trump brushed off Democratic calls on his Cabinet to declare him unfit from office and remove him from power using the 25th Amendment.

“The 25th Amendment is of zero risk to me, but will come back to haunt Joe Biden and the Biden administration,” President Trump said.

“As the expression goes, be careful of what you wish for.”

The rampage through the halls of Congress sent lawmakers of both parties and President Trump’s own vice president into hiding, as crowds called for Mike Pence’s lynching for his role overseeing the vote count.

The scene also undermined the hallmark of the republic — the peaceful transition of power. At least five people died, including one Capitol Police officer. 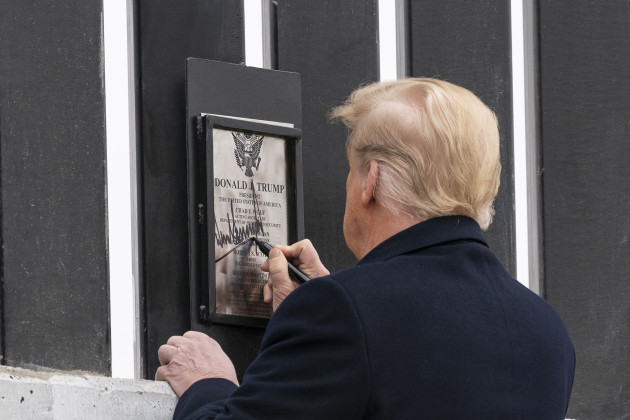 Trump signs a plaque on a section of the U.S.-Mexico border wall

In the days leading up to the 6 January certification vote, Trump encouraged his supporters to descend on Washington DC, promising a “wild” rally in support of his baseless claims of election fraud, despite his own administration’s findings to the contrary.

Speaking for more than an hour to a crowd on the Ellipse, he encouraged supporters to “fight like hell” and suggested that Republican lawmakers would need “more courage not to step up” and overturn the will of voters to grant him another term in office.

He also suggested he would join them in marching on the Capitol.

As Trump wrapped up, thousands of his supporters were already heading to the Capitol, where lawmakers convened to count the electoral votes.

As rioters were still in the building and lawmakers sheltered in secure locations, Trump, at the urging of aides who were shocked by the violence, released a video seemingly excusing the events, saying of the rioters: “We love you. You’re very special. Go home.”

Speaking today, Trump said the “real problem” was not his rhetoric, but the rhetoric that Democrats used to describe Black Lives Matter protests and violence in Seattle and Portland this summer,

“Everybody to the ‘T’ thought it was totally appropriate,” Trump said of his own comments.

He angrily lashed out at lawmakers’ push for his second impeachment this week, claiming: “It’s causing tremendous anger and division and pain far greater than most people will ever understand, which is very dangerous for the USA, especially at this very tender time.”

Aides have been urging the president to spend his remaining days in office highlighting what they see as the chief accomplishments of his presidency: a massive tax cut, his efforts to roll back federal regulations and the transformation of federal courts with the appointment of conservative judges.

But President Trump has been consumed by baseless allegations of voter fraud and conspiracies.

On impeachment, Trump said it is “a really terrible thing that they’re doing”. But he said: “We want no violence. Never violence.”

Trump faces a single charge — “incitement of insurrection” — in the impeachment resolution that the House will begin debating tomorrow, a week before Democrat Joe Biden is set to be inaugurated, on 20 January.

The FBI has warned ominously of potential armed protests in Washington and many states by Trump loyalists ahead of Biden’s inauguration.

The Washington Monument was closed to the public and the inauguration ceremony on the west steps of the Capitol will be off-limits to the public.

A Capitol police officer died from injuries suffered in the riot, and police shot a woman during the violence. Three others died in what authorities said were medical emergencies.

“It is clear that every moment Trump remains in office, America is at risk,” said a statement from the caucus, led by Representative Raul Ruiz. It said Trump “must be held accountable” for his actions.

Pence and Trump met late yesterday for the first time since the Capitol attack, and had a “good conversation” pledging to continue working for the remainder of their terms, said a senior administration official.

As security tightened, Biden said Monday he was “not afraid” of taking the oath of office outside at the Capitol.

As for the rioters, Biden said, “It is critically important that there’ll be a real serious focus on holding those folks who engaged in sedition and threatening the lives, defacing public property, caused great damage – that they be held accountable.”

Biden said he has had conversations with senators ahead of a possible impeachment trial, which some have worried would cloud the opening days of his administration.