TODAY TURKEY WILL hold an intense series of events to celebrate the first anniversary of the defeat of last year’s attempted coup, showcasing President Recep Tayyip Erdogan’s grip on power.

The authorities have declared 15 July an annual national holiday of “democracy and unity”, billing the foiling of the putsch as a historic victory of Turkish democracy.

A total of 249 people, not including the plotters, were killed when a disgruntled faction in the army sent tanks into the streets and war planes into the sky in a violent bid to overthrow Erdogan after one-and-a-half decades in power.

But they were thwarted within hours as the authorities regrouped and people poured into the streets in support of Erdogan, who blamed followers of his ally turned nemesis, the US-based preacher Fethullah Gulen, who denies involvement.

Without hesitation, the authorities embarked on the biggest purge in Turkey’s history, arresting 50,000 people and sacking over 100,000 more. Erdogan also shored up his position by winning an 16 April referendum on enhancing his powers. 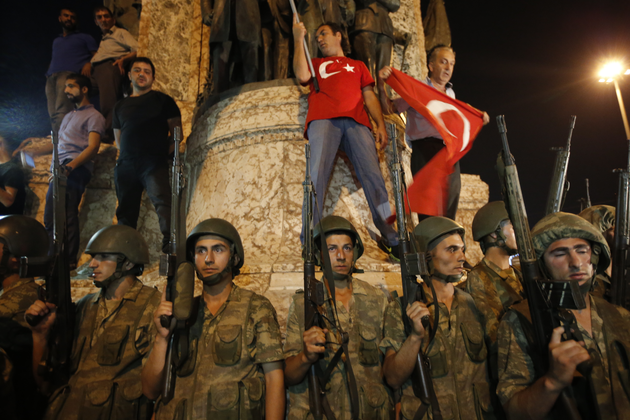 People and soldiers in the streets last year.

The scale of Saturday’s nationwide commemorations is aimed at etching 15 July, 2016 into the minds of Turks as a key date in the history of the modern state founded in 1923 out of the ruins of the Ottoman Empire.

“From now on, nothing will be as it was before July 15,” Erdogan said in a speech on Thursday.

He compared the defeat of the coup to the World War 1 1915 Battle of Gallipoli where Ottoman troops famously withstood an onslaught by invading Allied soldiers in what became one of the founding narratives of the modern state.

“States and nations have critical turning points in their histories that shape their future. July 15 is such a date for the Republic of Turkey,” he added.

Giant posters designed by the presidency have sprung up across billboards in Istanbul showing gaudy paintings that portray the key events of the coup night, including the surrender of the putschist soldiers.

Turkey’s opposition put political disputes aside on the night of the attempted coup.

But this has frayed since the 16 April referendum, with critics accusing Erdogan of pursuing one man rule and cracking down on anyone who expresses dissent.

In the latest swoop, authorities on yesterday announced the dismissal of a further 7,563 soldiers, police and officials, with nearly 350 retired army members also stripped of their rank.

Coming on the eve of the anniversary, a statement said those targeted were “linked to terror organisations, or groups determined to have been acting against the state’s national security”.

Earlier this month, Turkey also detained the country director of Amnesty International and over half a dozen rights defenders on charges of belonging to a terror group.

Turkey remains under a state of emergency imposed on 20 July, which has been renewed three times.

The commemorations will for Erdogan be a helpful riposte to a giant opposition rally – the largest in years – held last Sunday by the head of the Republican People’s Party (CHP) Kemal Kilicdaroglu at the end of a nearly one month foot march pushing for “justice” in Turkey.

Public transport is free in Istanbul over the weekend while mobile operator Turkcell has sent text messages to clients promising them a free extra gigabyte of data from 15 July.

Meanwhile, illuminated anti-coup slogans have been hung between the minarets of some of Istanbul’s greatest Ottoman mosques.

“Let our unity be everlasting,” says one of them.

A special session of parliament at 1000 GMT (11am Irish time) starts the commemorations.

Erdogan, at the centre of the events, will then fly to Istanbul to take part in a people’s march on the bridge across the Bosphorus that saw bloody fighting a year ago.

The bridge has since been renamed Bridge of the Martyrs of 15 July.

At midnight local time (10 pm Irish time) people across Turkey will take part in “democracy watches”, rallies commemorating how people poured out into the streets.

Erdogan will return to Ankara and give a speech in parliament to mark the time it was bombed.

A monument to those killed will then be unveiled outside his palace in the capital as the dawn call to prayer rings out.