TWO MORE DATES have been added to the Ed Sheeran tour, one in Cork and one in Dublin.

Aiken Promotions made the announcement this morning adding this was the “third and final dates added”.

Tickets for the two added dates will go on sale this Saturday at 9am. 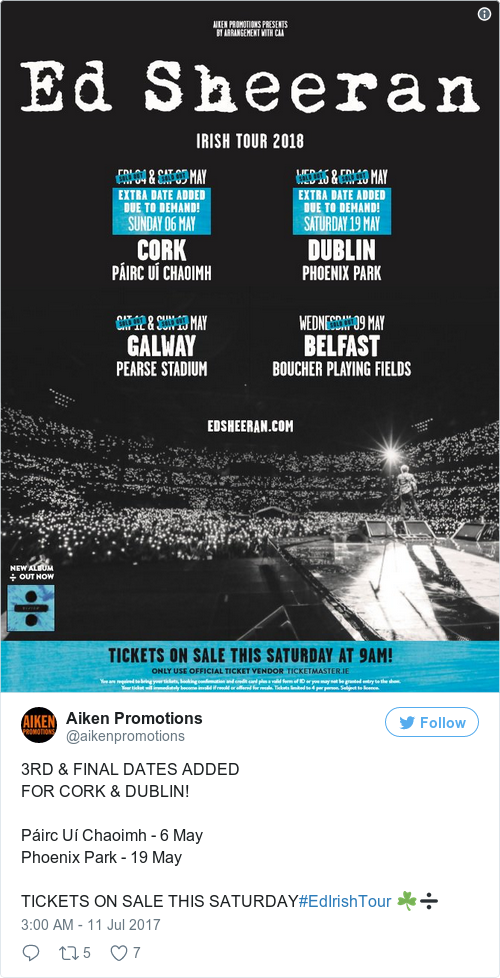 Tickets for the initial seven concerts went on sale at 9am on Saturday morning, six of the concerts sold out in under 8 hours.

The 300,000 tickets sold on Saturday made it the biggest ever number of tickets sold by an artist in Ireland in one day.

Some eager fans queued up outside Ticketmaster since Thursday to make sure they secure tickets.

In an attempt to clampdown on unauthorised selling of tickets, the person who purchased tickets on their credit card will have to go to the concert themselves.

If it’s a case where a parent bought the tickets on their credit card for their child, the child will need to present a copy of the card as well as ID showing the family name.

Despite this, tickets are being sold with heavily inflated prices on ticket reselling site viagogo.ie for up to €945 per ticket.

Aiken Promotions is advising fans not to purchase tickets via any secondary sellers or any unofficial source.

“Some websites are offering e-tickets / print at home tickets,” a statement from the promoter said.

These tickets do not exist for any of the sold-out Ed Sheeran Irish tour dates. In addition, seated tickets are on offer for seats that do not exist. The tickets are not legitimate and must be avoided.