HEALTH MINISTER SIMON HARRIS has said his department is examining whether a vaccine compensation programme can be rolled out in Ireland.

The Programme for a Partnership Government includes a commitment to put in place a no-fault basis scheme that will respond to the needs of children who suffered serious adverse reactions to vaccines.

How to implement such a scheme, which was one of the recommendations of the Vaccine Damage Steering Group, is under consideration due to the complex nature of such a plan.

The 2009 report which urged government to compensate people with disabilities arising from vaccinations has yet to be implemented – nearly ten years after it was drawn up.

In 2001, the Joint Committee on Health recommended that a vaccine damage compensation scheme be set up at the earliest possible date.

The Vaccine Damage Steering Group was established by the Department of Health and Children in early 2007 on foot of the Joint Oireachtas Committee’s recommendations.

The final report of the steering group was published in 2009 and recommended establishing an ex-gratia payment scheme with payment dependant on the severity of damage experienced by a person.

It recommended the scheme should be administered by the Department of Social
and Family Affairs.

All vaccines provided as part of public immunisation programmes, including future vaccines were to be included under the scheme.

A defined list of adverse effects exhibited for each vaccine were drawn up. The specified effect must occur within a specific period of time, dependant on which vaccine was
used, and must have lasted more than six months after the vaccine was given or resulted
in hospital stay and surgery or resulted in death. 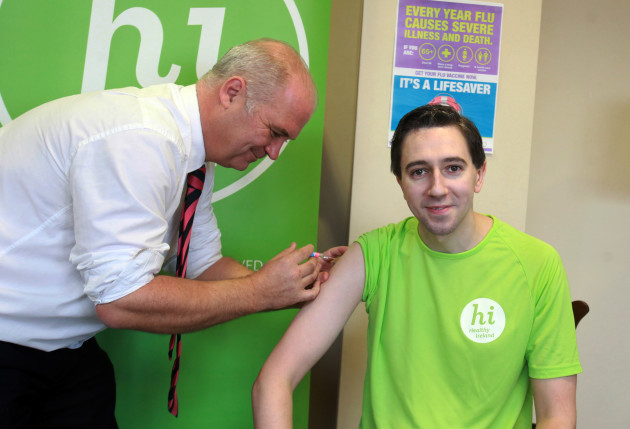 Simon Harris getting vaccinated in 2016.

My department has been examining the complex issues associated with the implementation of this commitment, including the statutory basis of the scheme, the arrangements for eligibility, the vaccines to be included, the criteria for determining an adverse event, the burden of proof required, the assessments of disability and how that should be conducted, the levels of award, the mechanisms for appeals, for litigation rights as well as its administrative location.

Answering a parliamentary question on the HPV vaccine, Harris is still considering considering how to implement and roll out the steering group’s recommendations.

“I expect to be in a position to make a recommendation on how this can be implemented before the end of 2017,” he said, reiterating his point that the HPV vaccine saves lives.

“The Health Products Regulatory Authority (HPRA) is responsible for monitoring the safety and quality of all medicines that are licensed in Ireland. While no medicine is entirely without risk, the safety of vaccines, as with all medicines, is carefully monitored and any new evidence concerning side-effects is taken into account.

“The HPRA and the European Medicines Agency continually monitor adverse events to vaccination,” he concluded.