EU COMMISSION PRESIDENT Ursula Von Der Leyen has demanded the immediate release of a journalist who was removed from a diverted Ryanair flight to face charges in his native Belarus.

In a statement this evening, Von Der Leyen said the EU Council is discussing sanctions to impose on Belarus.

“We will keep pressure on the regime until it respects the freedom of opinion and of the media. Roman Pratasevich must be released immediately.”

The commission president added that a €3 billion EU investent package for Belarus will be frozen until the country becomes democratic.

We have a 3 billion euro economic and investment package ready to go for Belarus, when it becomes democratic. pic.twitter.com/704CAyX8tZ

In a video circulated by Belarus state TV channels this evening, Protasevich (26) said he is cooperating with authorities and “confessing” to charges of organising protests

“I can say that I have no health problems… I continue cooperating with investigators and am confessing to having organised mass unrest in the city of Minsk,” he said in the video.

Belarusian opposition leader Svetlana Tsikhanouskaya criticised the video on Twitter, saying that “this is how Raman looks under physical and moral pressure” and demanded his “immediate release”.

Earlier, Taoiseach Micheál Martin said the Belarusian government’s defence of forcing a passenger plane to divert to Minsk so authorities could arrest a journalist is “nonsense”.

A defiant Belarus today defended its forced diversion of a Ryanair plane carrying the journalist and opposition activist, after the unprecedented move provoked a global outcry and calls for a tough response.

The Ryanair flight from Athens to Vilnius carrying Protasevich was diverted while in Belarusian airspace yesterday over a supposed bomb threat.

Accompanied by a Belarusian fighter jet, it landed in the capital Minsk where Protasevich, who had been living between Poland and Lithuania, was arrested along with his girlfriend.

There are growing fears that Protasevich has since been tortured.

This afternoon, Lithuania said it would not authorise any departing or arriving flights that cross Belarusian airspace.

“Any flights to or from Lithuanian airports via Belarusian airspace are prohibited” from Tuesday, Transport Minister Marius Skuodis told a government meeting in the capital Vilnius.

In its first official reaction to the incident, Belarus’s foreign ministry insisted the country had acted legally and accused the West of trying to play politics.

“There is no doubt that the actions of our competent authorities… fully met established international rules,” ministry spokesman Anatoly Glaz said in a statement, accusing the West of “politicising” the situation.

When asked about the statement, the Taoiseach said it was “nonsense”.

He told RTÉ’s Today with Claire Byrne: “I think we all know what happened here. Don’t be hiding behind excuses – you forced the plane down to arrest a journalist whose views you don’t agree with, contrary to any sense of human decency or democratic values.”

Martin said the incident was “a state-sponsored coercive act” and “absolutely unacceptable”. He said the EU needs to respond “very strongly to it”. 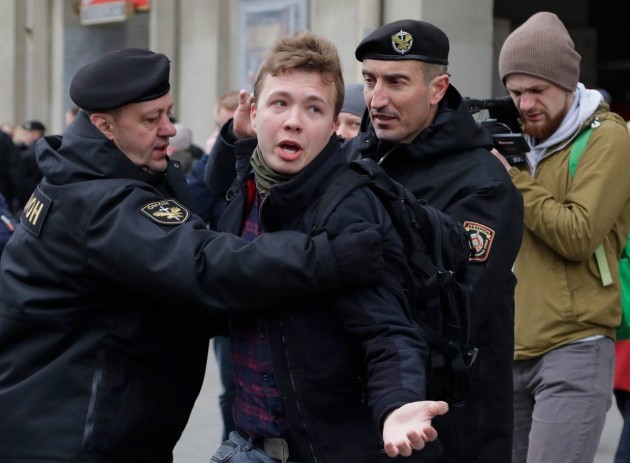 Ahead of an EU meeting this evening, which was planned prior to the incident yesterday, Martin said he would meet his counterparts from Lithuania and Greece to discuss the situation.

He added that the EU Council would discuss possible sanctions and other measures it may take against Belarus.

“There have to be measures that respond firmly to an act of this kind, which put the crew and the passengers at risk, it put their safety at risk. This kind of behaviour, it’s piracy in disguise and it’s just not acceptable.”

Speaking on arrival in Brussels this afternoon, the Taoiseach said Protasevich should be released. He said Ireland will be articulating its view at the meeting today, stating that he will be pushing “very strongly” for assurances of his wellbeing.

The Minister of State Thomas Byrne has been in touch with the Belarus opposition leader and Ireland is keen to advocate on Protasevich behalf to ensure he is treated properly and released, said Martin.

The Taoiseach said countries that “espouse democratic values and international rules of engagement have to stand up to this type of behavior”.

A report on the impacts of any proposed sanctions will be circulated prior to this evening’s meeting, said Martin, who would not be drawn on whether he would be in favour of banning flights from Belarus. He said the full implications of such measures and the impact on citizens, would have to be considered carefully.

24.05.21
Roman Protasevich: The award winning journalist who was branded 'terrorist' by Belarusian authorities

The British Foreign Secretary Dominic Raab said it is “very difficult to believe” the arrest Protasevich could have taken place “without at least the acquiescence of the authorities in Moscow”.

Raab said that although the situation was not yet clear, the relationship between Minsk and Moscow suggested Russian leaders may have been aware of the plans in advance.

Russian Foreign Minister Sergei Lavrov said that Belarus was taking an “absolutely reasonable” approach to the diversion of a Ryanair passenger flight carrying an opposition activist.

“A representative of the Belarusian foreign ministry stressed the readiness of the Belarusian authorities to act on the issue in a transparent manner,” Lavrov told reporters. “I think this is an absolutely reasonable approach.”

NATO is due to meet tomorrow to discuss its response.

There has been much speculation that a number of KGB secret service agents were present on the plane and did not re-board it after it landed in Minsk.

Martin said this seems likely but is yet to be confirmed.

Ryanair released a statement on the incident last night. However, it failed to mention that five or six people didn’t get back on the plane: Protasevich and his girlfriend, who were detained, and three or four others who people suspect were KGB agents.

“I don’t know for sure but what we do know is when the plane land either five or six people [didn’t get back on].

“Only one or two people were actually arrested so that certainly would suggest that a number of the other people who left the plane were secret service. We don’t know from what country, but clearly linked to the Belarusian regime.”

Coveney called the incident “effectively a state kidnapping” and “aviation piracy”. He said there needs to be a “very clear signal from European leaders” that what happened is not acceptable.

“There needs to be an independent and international inquiry into what happened, but in advance of that I think there needs to be a very clear signal from European leaders, as soon as this evening, that this is something that simply can’t be tolerated.”

Coveney added that the election of Lukashenko last August was “clearly not legitimate”.

Lithuania and Latvia have called for international flights not to use Belarusian airspace.

The International Civil Aviation Organization — the UN’s civil aviation agency — said the forced landing “could be in contravention of the Chicago Convention”, which protects nations’ airspace sovereignty.

Minsk’s airport released a statement yesterday saying the plane had to make an emergency landing there at 12.15pm following a bomb scare.

“The plane was checked, no bomb was found and all passengers were sent for another security search,” said Nexta, a Belarus opposition channel on the Telegram messaging app, which Protasevich previously edited.

Lukashenko’s press service said on its own Telegram channel the president had given the order to divert the flight and had ordered a MiG-29 fighter jet to accompany the plane.

It comes as Belarus authorities intensify their crackdown on the opposition following historic protests that gripped the ex-Soviet country after last year’s disputed presidential election.

“This shocking act perpetrated by the Lukashenko regime endangered the lives of more than 120 passengers, including US citizens,” he said in a statement, using an alternative spelling of the Belarusian leader’s name.

He added on Twitter: “We demand an international investigation and are coordinating with our partners on next steps.”

Since last August’s disputed election, Belarusians have taken to the streets demanding the resignation of Lukashenko, who has ruled for over two decades.