A STATUS YELLOW thunder warning issued by Met Éireann will stay in place until 11pm tonight.

Dublin Fire Brigade has warned people that the thunder may set off burglar alarms. Pet owners are also being urged to take care of their animals and allow dogs inside.

Dogs Trust Ireland suggested turning on the radio to distract dogs from the noise. It said:

With thunder forecast, please make sure your dogs are safely inside. If thunder frightens them, give them a tasty chew and put on the radio.

Dublin Fire Brigade also recommended grabbing your thunder buddy if it comes to it. 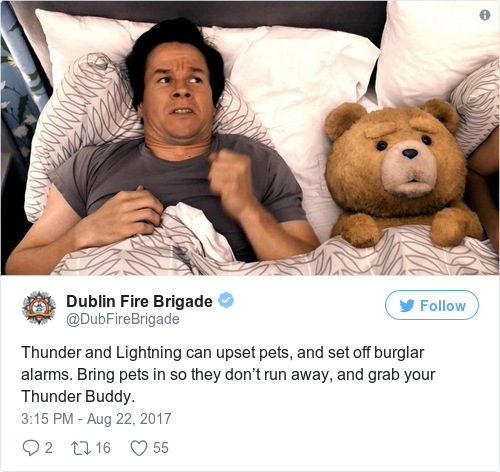 Thunder and Lightning can upset pets, and set off burglar alarms. Bring pets in so they don’t run away, and grab your Thunder Buddy. pic.twitter.com/FO4PjA4N8G

A separate rainfall warning that was issued by Met Éireann ended at 9pm. It was issued for Connacht, Cavan, Monaghan and Donegal.

AA Roadwatch has reported flooding on a number of roads in Leitrim, Donegal, Cavan and Longford.

Flooding is reported on a number of roads in Carrick-on-Shannon and conditions are particularly treacherous on the N4 Sligo/Dublin Road approaching the town from the Boyle side.

In Donegal, spot flooding has been reported on the N13 Ballybofey/Letterkenny Rd at Kilcross.

There are also reports of spot flooding in Cavan town and on local roads in the vicinity of Lough Gowna.

Read: The last child to be pulled from Italian earthquake rubble had just saved his younger brother