IRELAND’S JASON SMYTH and Michael McKillop sensationally defended their World Championship titles at the Para Athletics World Championships in London last night, with the pair delivering double gold for Ireland in the space of 10 minutes.

In front of a huge crowd at London’s Olympic Stadium, Smyth produced another electrifying performance as he stormed to gold in the 100m T13 final in 10.63 seconds to remain the fastest Paralympic athlete on the planet.

“I knew from the heats I’d run the quickest and it was mine to lose so it was just about going out and executing my race, being patient and thankfully I was able to cross the line first,” Smyth said afterwards.

“When you come back to London and you look back at the Games here and consider how incredible it was the reality is they’ve set new standards and a new bar for how world championships should be done. Adding that all into tonight it’s just phenomenal to be here and to do it again.

“I had my wife and my daughter in the crowd, and all my family and it’s those moments that make it all the more special, to enjoy it with the people that mean the most.”

No more than 10 minutes after Smyth had retained his title, McKillop did the same as he stormed to victory in the T38 800m — his eighth World Championship gold medal.

The Antrim athlete delivered an assured performance winning in a season’s best time of 2:00.92.

Speaking afterwards the four-time Paralympic champion said: “Myself and my dad came up with tactics for today from Beijing 2008. No one in that race today was in my race in Beijing so they didn’t know what I was going to do. 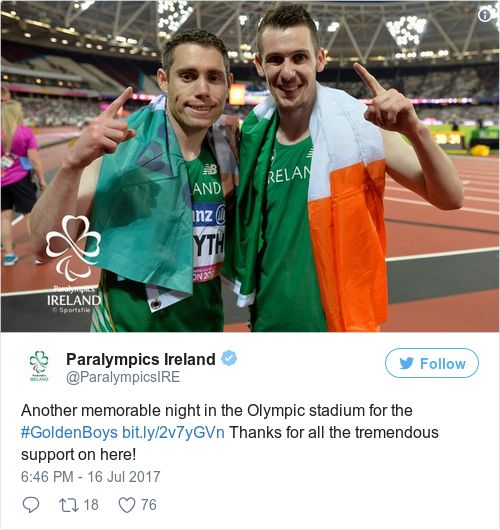 Another memorable night in the Olympic stadium for the #GoldenBoys https://t.co/EupTwCQoYL Thanks for all the tremendous support on here! pic.twitter.com/uly3IlFVru

“I looked over my right shoulder from 240m to go and did a pick up and the Canadian came right behind me and I just kicked and whenever I do that no one can stay with me and I was able to come down the home straight knowing that I had a gap but I was able to keep driving on for the finish line.”

Referring to winning within minutes of team-mate and close friend Smyth, McKillop added: “It’s really special to have followed in the footsteps of your best friend. To have that moment to be able to do a lap of honour together after so many years competing in Paralympic sport.”

“Also to be able to do it here with my fiance and family in the crowd it’s even better. To see her in tears it just shows you that it’s teamwork. It’s not just me on the track – it’s my whole family and all the support team.”