RENTS ACROSS IRELAND grew by 7% on an annual basis in the second quarter of 2021, an increase that the Residential Tenancies Board (RTB) has flagged as a “source of concern”.

The latest rent index from the RTB has revealed that, in the three months from April to June, rents underwent the highest national growth rate since the first quarter of 2019.

In reporting the increase today, the rental watchdog pledged to investigate and sanction landlords that break rent cap rules as the jump may indicate an “unacceptable level of non-compliance” with regulations restricting rent increases in Rent Pressure Zone areas.

Rents are highest in Dublin, with the average rent standing at €1,848 a month. This represents a 1.2% increase compared to quarter one and a 2.4% jump on a year-on-year basis.

Galway city has the second highest rent, averaging €1,355 per month. Cork city follows closely behind, with the average rent standing at €1,344, while in Limerick city it is €1,196.

With average rents of €969 per month, Waterford is the only city where the standardised average rent is lower than €1,000 per month.

Rents in the cities of Waterford and Limerick City increased by 9% and 8.7% year-on-year.

The index shows that rents rose in all but three counties in the second quarter of 2021.

On a quarterly basis, rents in Leitrim increased the most with a growth rate of 17.6%. Louth experienced the largest quarterly decrease, falling by 0.5%.

The county with the lowest monthly rents was Donegal at €677 a month.

The RTB also reported a decline in the number of tenancies registered. The index for the second quarter has 13,884 tenancies compared to 16,085 in the first quarter of the year. 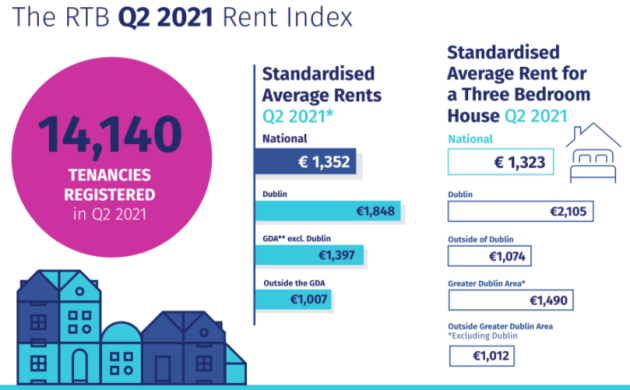 Padraig McGoldrick, Interim Director of the RTB, said the report released today shows national rent increases have rebounded quickly after an initial slow down due to the impact of Covid-19 lockdowns.

The easing of restrictions and the uptick in economic activity has resulted in rents rising in the commuter belt near Dublin, indicating the pandemic has resulted in people moving away from urban areas.

The RTB is yet to examine the effect of new legislation linking rents to inflation instead of a 4% cap, but McGoldrick has said the level of reported increase is still concerning.

“While the latest rent levels will not yet have been impacted by the change in rules for rent setting introduced in July, the level of increase in Q2 2021 is a source of concern and, while there may be legitimate reasons reflecting the rate of increase, it may also indicate an unacceptable level of non-compliance by landlords with rent setting regulations restricting rent increases in Rent Pressure Zone areas (RPZ),” McGlodrick said.

The impact of not complying with these measures can be very severe, and the RTB is committed to ensuring increased compliance with these requirements.

The RTB is currently investigating over 400 cases of non-compliance by landlords in relation to rent increases.

The board has the power to investigate and apply sanctions to landlords that circumvent the legislation in relation to RPZ rent caps. It can apply fines of up to €15,000 and/or costs up to €15,000.

“As of quarter 2 2021, the RTB has commenced almost 400 investigations into improper conducts and to date almost €260,000 has been refunded to current and former tenants as a direct result of breach of rent setting rules,” McGoldrick said.

“On the basis of a request from Minister Darragh O’Brien, the Minister for Housing, Local Government and Heritage, the RTB will escalate its response and introduce an accelerated and focussed campaign to identify and, where necessary, pursue those who abuse or ignore their rent setting responsibilities,” McGoldrick added.