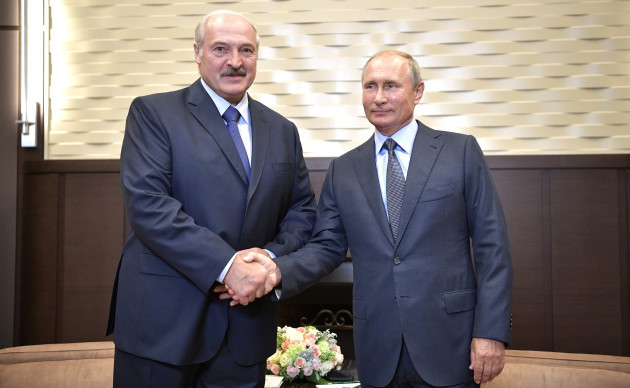 THE ARREST OF an opponent of Belarus’ president Alexander Lukashenko has put the country and its leader in the headlines again, months after historic demonstrations in the country made international news.

The opposition in Belarus and western officials have denounced yesterday’s incident, which led to the arrest of Raman Pratasevich following a hijacking operation by the country’s government.

Pratasevich was on board a Ryanair flight from Athens to the Lithuanian capital of Vilnius when the plane changed course unexpectedly and landed in Minsk.

He is a co-founder of the Telegram messaging app’s Nexta channel, which officials in Belarus last year declared as extremist after it was used to help organise major protests against Lukashenko.

The protests have dwindled in recent months, but Belarus authorities are continuing to stamp their authority on the country’s opposition.

Yesterday’s incident – which was criticised by politicians across Europe – was just the latest in a series of crackdowns against dissent in the country since last year’s protests.

Lukashenko, who has ruled Belarus with an iron fist since 1994, won his sixth term in office after secured 80% of the country’s vote in an election last August.

In the immediate aftermath, supporters of opposition candidate Sviatlana Tsikhanouskaya and some poll workers claimed the election was riddled with fraud and rejected the results.

But Lukashenko refused to step down, leading to mass protests across the country and demonstrations which drew up to 200,000 people.

A harsh crackdown followed: Tikhanovskaya fled to neighbouring Lithuania and more than 34,000 people have been arrested in the months since.

Police have used stun grenades, tear gas and truncheons to disperse the rallies and several protesters have been killed, with hundreds more sentenced to lengthy prison terms.

Lukashenko has turned to Russia for help, while the US and the EU have responded to the crackdown on protests by introducing sanctions against Belarusian officials. 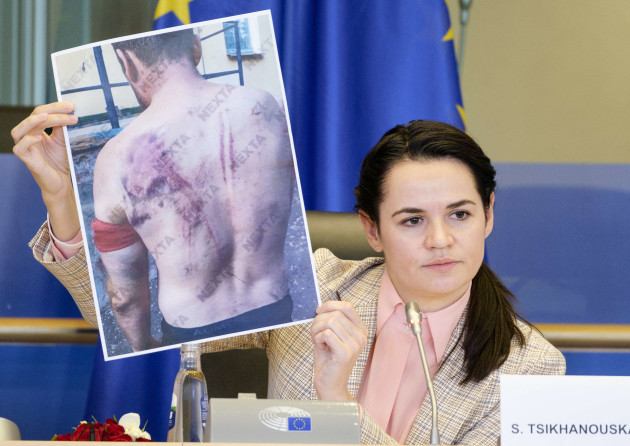 The protests gradually died down during the winter, but Belarus has continued to take action to stifle dissent – including against independent media in the country.

In February, Lukashenko denounced opposition to his rule as a foreign-directed “rebellion” and claimed “very powerful forces” abroad were behind the protests.

A fresh clampdown on opponents followed a week later, with raids in the homes and offices of journalists, rights defenders and trade unions.

The independent Tut.by news website became a particular target for the government, following its coverage of the widespread demonstrations in the country

In March, journalist Katerina Borisevich was found guilty (alongside a doctor) of “disclosing medical records” after Tut.by published information about a former soldier who died from head injuries he received during a protest.

And just last week, 11 staff members of Tut.by were detained by police after the website had its press credentials removed for covering the protests.

Protests also sprang up again as the winter thawed. Over 100 people, including five journalists, were detained in late March when demonstrators planned a “second wave” of demonstrations.

That came after opposition supporters in the capital Minsk planned on gathering, but were prevented from doing so by police. 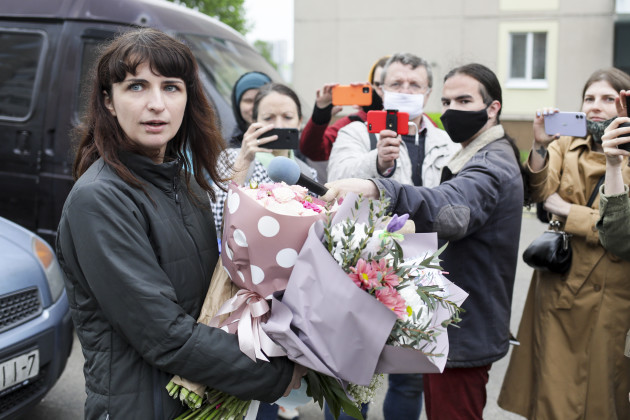 Katsiaryna Barysevich holds flowers after being released from prison

Although international criticism had waned somewhat before Sunday’s Ryanair incident, steps had been taken to punish the Belarusian government’s crackdown on last year’s demonstrations.

Earlier this year, EU member states voted to impose further sanctions against Lukashenko’s regime over how it has handled the protests.

Asset freezes and visa bans have been placed on 88 people tied to the repression – including Lukashenko and his son – which will last until at least next year.

Opposition leader Svetlana Tikhanovskaya, who has been placed on a wanted list for “preparing mass unrest”, has also met with leaders and foreign ministers of some Western countries which have refused to recognise results of last year’s vote.

Belarus has requested her extradition to face prosecution for “crimes against the governing order” – charges that Tikhanovskaya denies.

In response, Lithuania’s Foreign Minister Gabrielius Landsbergis said his country “has been and will be a brick wall behind which all democratic forces persecuted by regimes will find refuge”.

“We can say only one thing to the Belarusian regime: hell will first have to freeze over before we consider your requests,” he said.

The criticism has spread further afield too, with the US also imposing sanctions and the UN voting in favour of a resolution that was critical of Lukashenko’s government and its response to the protests.

With reporting from Press Association and © AFP 2021