A SOCIAL MEDIA campaign demanding that Afghan men refer to their wives by their own name in public is gaining traction in the deeply patriarchal country.

It is common in Afghanistan for women to be known only as the “wife of” or “daughter of” someone. Often their names are omitted from wedding invites and even gravestones.

But an online campaign called #WhereIsMyName, started recently by a group of young Afghan women, is challenging the centuries-old tradition and seeking to spread awareness about the right to identity.

“I joined because I really want to see change. I’m tired of the fact that in the 21st century we are living in a medieval century,” 26-year-old Tahmina Arian told AFP.

The movement started in Afghanistan’s western city of Herat in early July when a handful of women posted comments and photos on Facebook and Twitter using the hashtag #WhereIsMyName.

Hundreds of others across the country soon followed, including men who wrote the names of their wives. Afghan celebrities have also backed the campaign, which is receiving significant airtime on local news channels. 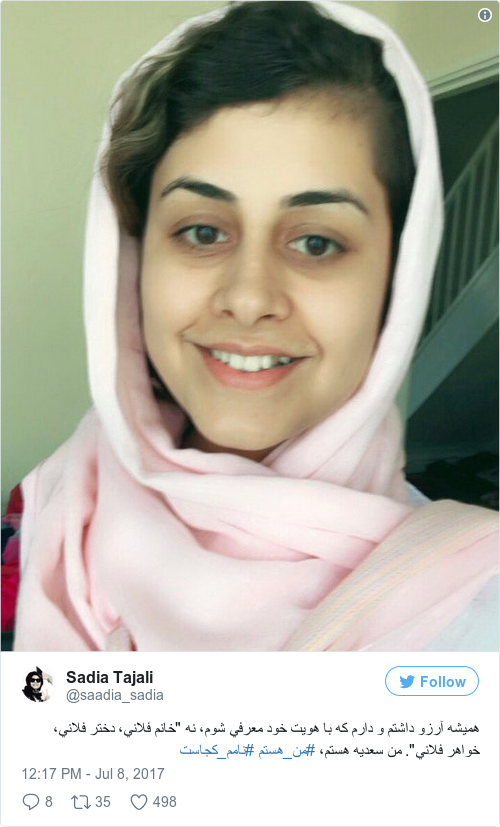 Last week the movement held its first public event in the capital Kabul. It was attended by dozens of women. A government minister and several scholars made speeches.

“We have got together to break a taboo. We want our women to know about their basic right to be called by their own name, to have their own identity,” said Arian, who helped organise the gathering.

‘Not a human being’

Sabira Madady, a 20-year-old student, once had to repeatedly ask a teacher to call her by her name in class. Even then he would only use her family name so as not to “identify her to boys”, she said.

“When someone calls me by another name I feel so bad, like I am not a human being. Society sees me as belonging to someone else,” Madady told AFP.

In some rural areas, where there is little education, men are known to even use a single term, roughly translated as “black-headed”, to refer to women.

For rights activists the name issue is evidence of women’s status as second class citizens — the property of men in a misogynistic society.

“If a woman knows her name then she has an idea about herself and what she wants. But if she only knows herself through the eyes of her husband or brother then everything is planned for her,” said Arian.

The custom is rooted in Afghan tribal culture, according to sociologists. A man can lose honour if his wife is known by her name, they say.

“The tradition has been going on for centuries. Our society is ultra-conservative and Afghan men can feel shame if they call a woman by her name,” Mohammad Amir Kamawal, a professor of social sciences at Kabul University, told AFP, refusing to blame religion.

“Nowhere does the Koran mention that women should not be called by their names. Conservative mullahs have misinterpreted some verses,” he added.

The campaign received a boost when hugely popular Afghan singer Farhad Darya posted a photo of himself and his wife online alongside both their names. 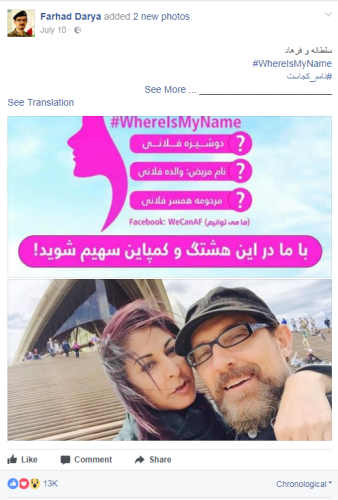 But there has also been plenty of negative feedback.

“It’s better to say, ‘Where is my hijab rather than where is my name? May God never make women shameless,” wrote one social media user.

Another accused the campaign of “misleading Afghan women” and trying to turn them into Westerners.

Arian said the activists had even been called “prostitutes”. She admits they have taken a risk in speaking out, but remain determined to help “all Afghan women”.

Spreading the message isn’t easy though. Only a tiny fraction of women have access to the internet while vast areas are inaccessible due to the 16-year-long Taliban insurgency.

“It will take years to change the habit,” said Kamawal, the sociologist.

Read: Sexism row in New Zealand after party leader is told public has right to know her parenthood plans>

Read: Conor McGregor in racism and sexism row after saying he’s ‘half-black from the belly button down’>