YESTERDAY, a report on promoting gender diversity in the healthcare sector was launched, with a view to implementing changes that will promote a positive change.

Just 7% of all surgeons in Ireland are women, despite 50% of female medical graduates and 34% of surgical trainees being women.

The Royal College of Surgeons tasked Deborah McNamara with carrying out the report into the problem of gender diversity, with the input of the Working Group on Gender Diversity, medical trainees, and international literature.

Through their work, they found that issues faced by women in the healthcare sector pursuing their career included: a lack of communication about their options, an absence of competitiveness in interviews, and not enough flexibility to care for families.

“We looked at all of the steps through the surgical training pathway and we were trying to identify barriers at all of those stages,” McNamara said, who is a consultant in General and Colorectal Surgery at Beaumont Hospital.

McNamara said one of the aspects they found striking was an issue around being competitive in an interview during promotions.

There’s definitely an issue around being competitive in an interview. I mean in a public health service it’s important we compete and that the best people get the jobs.

McNamara said that it’s the role of the RCSI to advise people to ensure they know what’s expected from them in interviews, and give trainees the correct career advice. 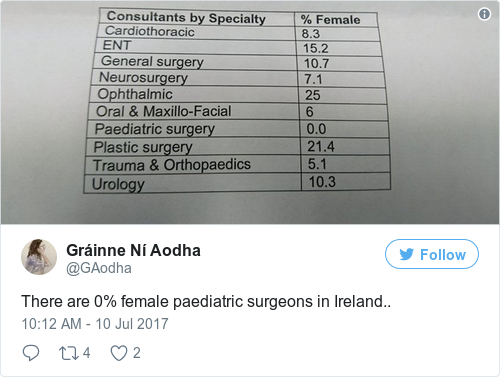 There are 0% female paediatric surgeons in Ireland.. pic.twitter.com/WfZ8sO9zwQ

“Our role as a college and as a training body is to help people so they know what’s needed… and also maybe to provide career advice because sometimes career decisions are being made and if you don’t have good advice at those critical junctures in your career, sometimes you can go astray at those points.”

Other global research suggests that a lot of women only apply for a job when they meet all of the advertised criteria:

Women working at Hewlett-Packard applied for a promotion only when they believed they met 100% of the qualifications listed for the job. Men were happy to apply when they thought they could meet 60% of the job requirements.

“Especially in something like surgery where there’s a lot of night warding, there’s emergency duty, and sometimes we have to give very practical advice to people about how to navigate those changes.”

In response to the RCSI report, Minister for Health Simon Harris announced that the HSE is to ask women about their personal experiences of balancing pregnancy with work.

It’s hoped that this will help understand the obstacles women face in the healthcare sector, and how schedule could be made more flexible to allow both men and women to return to work once they become parents.

“Surgery is a demanding career, no matter who’s doing it,” McNamara said.

Read: HSE to ask women working in the health sector how they balance maternity with work

Read: ‘Don’t keep it a secret’: One in five female doctors has been sexually harassed at work