MICHEÁL DONOGHUE ULTIMATELY led Galway to the Holy Grail of an All-Ireland senior hurling title in 2017.

But, when he began his tenure, it wasn’t necessarily a ‘Carlsberg world where you’d hit the ground running and win everything’ as he explains on this week’s episode of How To Win At Dominoes, the coaching podcast hosted by Shane Keegan.

The Clarinbridge native took the job ahead of the 2016 league, a campaign which saw Galway drop out of Division 1A.

“I was a Galway supporter from the outset, and I was adamant, at a stage you were going to games and you were going, ‘if I was, if we were, what would we do different’.

“So there were things on the field and equally things off the field that you were saying we’d change.

“But we got relegated from league one and got bombarded. I’ll never forget walking off the pitch after that defeat to Cork and I was being lambasted left, right and centre, abused, top to bottom, and this is only two and half months into the job when you’re only trying to put your own stamp on it.

“And in fairness, the players were brilliant. Their application, dedication, commitment to it. The buy-in from them was top-notch and you can see it building, but it’s small steps, it’s small wins — it might be two steps forward, a step back, but we could see where we wanted to go. But that was a massive kick for us.

“We got lambasted, I remember getting a phone call. I used to stay at home with dad after he got sick.  I remember sleeping at home that night in the home house and getting a call from a high-powered person and just giving me an earful and I remember thinking ‘are you joking like? We’re two months in the job, will you just give us a chance, man.

“And after that we just started progressing and building and putting our own print on it. And it’s not about us and I’ve said this the whole time, it’s about a group of players, and we got a massive response from them.” 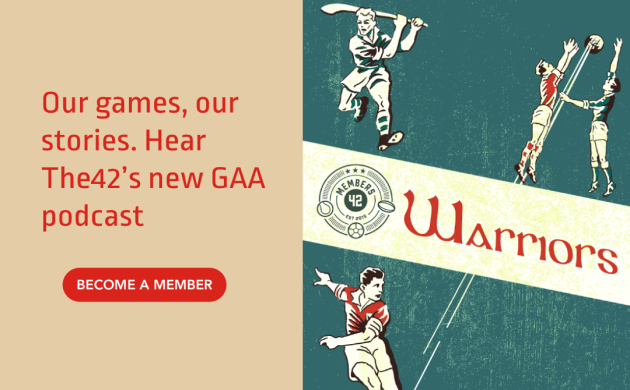 To listen to this week’s episode in full, and to get access to our other member-only podcasts and more great benefits, join The42 Membership today. Click here for more information.