US PRESIDENT JOE Biden has sent a letter to six-year-old Adam King from Cork who warmed hearts when he appeared on the Late Late Toy Show last year.

Adam received the message from the US president along with an American and Irish flag that were on board missions to space.

In the letter, Biden told Adam that people around the world are working to beat Covid-19 and that “your message helps give them strength, and it gives me strength”.

“I’m sure your family knows the Gaelic proverb, ‘Ar scáth a chéile a mhaireann na daoine’ – ‘In the shadow of each other, we live’. We all need to connect and feel close with other people, and you have done a special thing by bringing people closer together with your virtual hugs,” Biden wrote.

Aspiring Nasa CAPCOM (captain of ground control) Adam first featured on RTÉ during the Late Late Toy Show last November, where he shared his “a hug for you” artwork.

Adam, his parents David and Fiona, his sisters Katie and Sarah and his brothers Danny and Robert appeared again on RTÉ One’s Late Late Show this evening.

He told viewers that Taoiseach Micheál Martin delivered the letter from Joe Biden to his home in Cork.

“I got a letter from the President of the United States in America called Joe Biden,” Adam said.

“He said that him and his wife Jill gave me a virtual hug from the White House,” he said.

The “standout moment” for David from the Toy Show was when Tubridy asked Adam if the hug was for him or for everyone, and Adam said it was “for everyone”.

Biden wrote in his letter that “on St. Patrick’s Day, your Taoiseach, Micheál Martin, told me about the great work you have been doing and most importantly, your virtual hugs. They are a wonderful symbol of hope and joy and have helped many people during these difficult times,” Biden wrote.

“I hear you love space and dream of becoming a CAPCOM at Nasa. You will have to work very hard and do your best in school, which I know you will, and never let yourself give up,” he said.

“When I was your age, I had a problem speaking. I would stutter when I had to talk in front of others. I practiced reading Irish poetry out loud in front of the mirror until eventually, I could speak more clearly and confidently. It’s part of my story.”

And one day, if you end up sitting in the CAPCOM seat in Houston, I know you will inspire even more people to reach for the stars and follow their dreams.”

“Adam, you have already inspired the Irish people and the world with your message of connection. I hope you continuje to share love and virtual hugs around the world. We are rooting for you. Jill and I send a virtual hug from the White House to you, your Mom and Dad, and your brothers and sisters.” 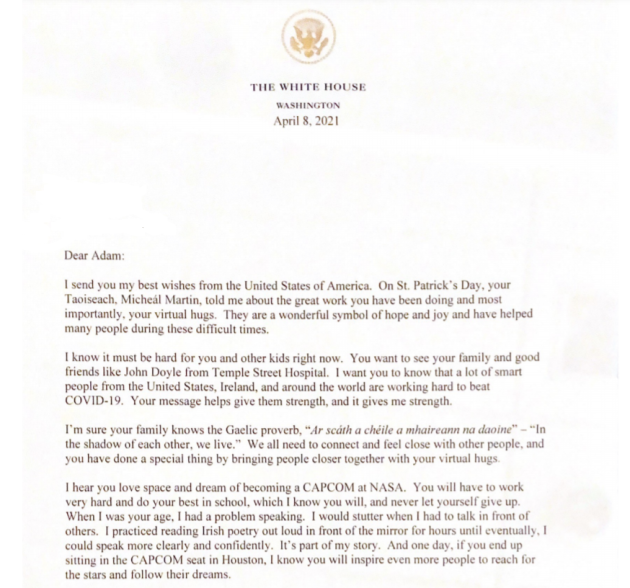 The letter from Joe Biden to Adam King Adam and his family met Olympic champion Katie Taylor, who also appeared on the Late Late Show this evening. 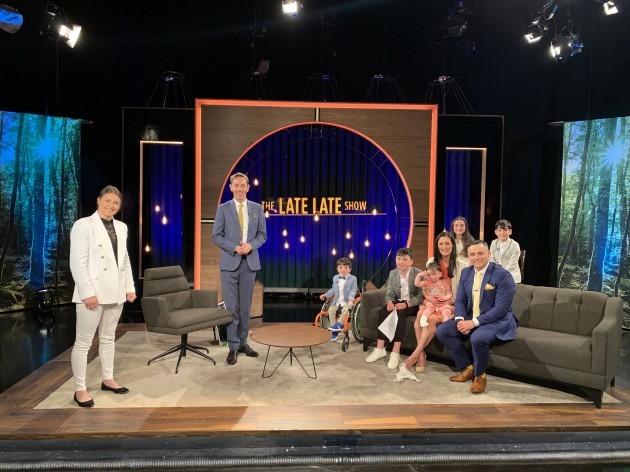