GARDA COMMISSIONER NÓIRÍN O’Sullivan has said an internal review of the Jobstown protest investigation will not cover the court process.

The Commissioner was asked by the Oireachtas Public Accounts Committee about claims in relation to garda evidence provided in the recent court case.

O’Sullivan told TDs that Assistant Commissioner Barry O’Brien was appointed to “conduct a review from a lessons learned perspective on the circumstances surrounding the events that unfolded in Tallaght”.

When questioned by Sinn Féin’s Mary Lou McDonald, she clarified that the review was not just about lessons learned on the day, but “the circumstances of the entire affair”.

McDonald asked if that included allegations about garda testimony in the trial.

The Commissioner said she was “very conscious of the independence of the executive arms of the state, in particular the law officers and the court system… don’t think I can comment any further”.

O’Sullivan: ”Assistant Commissioner O’Brien has been appointed to conduct a review of the entire matter from a lessons learned perspective…”

McDonald: ”Including the matter I’ve raised?”

O’Sullivan: ”…and he will conclude his review…”

McDonald: ”Including the matter I have raised?”

O’Sullivan: “Deputy the court system I’m sure you will appreciate, is completely independent.” 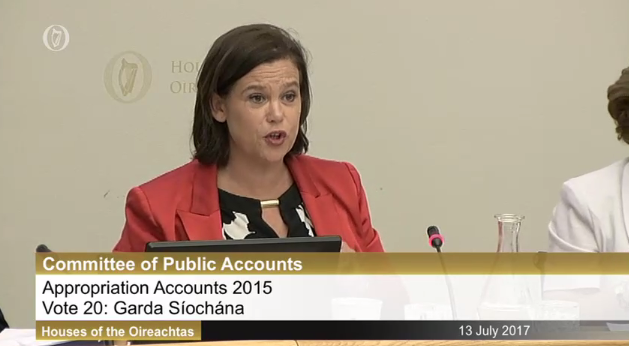 During their 10-minute interaction, McDonald asked the question seven times.

Her party colleague David Cullinane said it is “unacceptable if the commissioner is allowed to filibuster and not to answer straight questions”.

O’Sullivan did clarify that once matters currently before the court are concluded, that will “feed into the review”.

Chairman of the committee Seán Fleming sought to set the matter straight, but when he suggested the Assistant Commissioner in charge of the review would, once all court matters are concluded, be examining the court process, the Commissioner corrected him.

“Not the court process, because he would have no authority in which to examine [that], the courts are an independent institution,” she said.

She also stressed that the Garda Síochána Ombudsman Commission is the appropriate body to examine any concerns a person might have about the behaviour of a member of the force.

Read: Paul Murphy criticises Varadkar for comparing Jobstown protest to ‘a scene from Lord of the Flies’>