Konshens is making it known that he did not try to diss Bounty Killer despite what’s being circulating on social media.

This, after rumors, started circulating that Konshens was throwing shade at Bounty Killer and showing support for Alkaline. The bloggers came to this conclusion after Konshens made a series of posts showing that he had bought Alkaline’s album. He also spoke on supporting each other in the dancehall fraternity.

On his Instagram story, Konshens posted the picture of Alkaline’s Top Prize album showing that he had purchased it. He also tagged Alkaline in the post and captioned the image, “Good one. Pre it.”

The “Gal a Bubble” singer subsequently made another post on his Instagram page, saying, “Dem artiste yah love chat bout UNITY an SUPPORT but a only when it suit dem or when a dem fren. We seh DANCEHALL.”

Since this came on the heels of Bounty Killer expressing that he had no ratings for Alkaline, many took the posts to be a dig at Killer and ran with that interpretation.

Konshens, however, took to Twitter to express that he was not taking sides and did not care about the “beef” between the “Cree” singer and the “Poor People’s Governor.”

Konshens said, “woke up to “Konshens diss Bounty killa fi Alkaline”… you will neva live fi see dat. Not even know or care if killa an alka at odds. Bloggers unnu behave. “mi nuh frighten fi nobody… but mi RESPECT EVERYBODY” #DANCEHALL.” 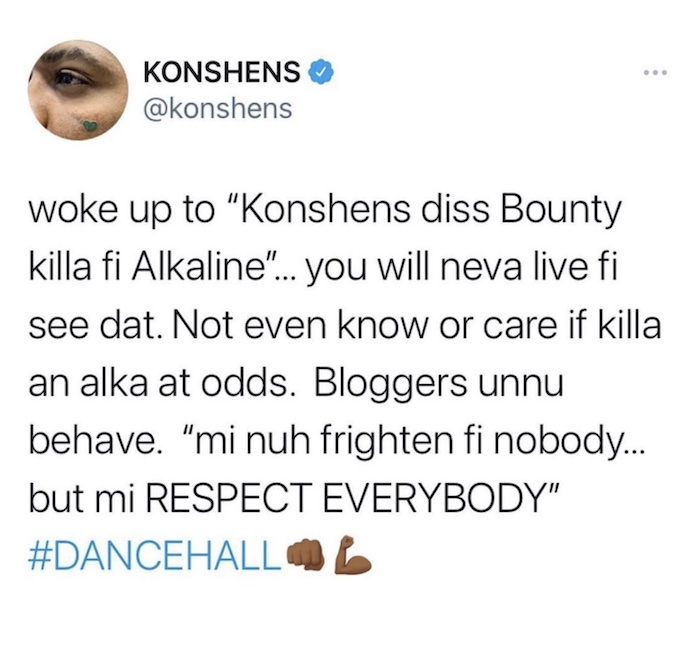 While Bounty Killer has expressed his disdain for Alkaline, calling him “kids meal” and “brawta artiste”. Alkaline has not commented publicly on the artiste. At this point, the beef seems to be one-sided, with Bounty going back and forth with Alkaline’s fans on social media.