Vybz Kartel is a big fan of Skillibeng’s music.

Skillibeng has been enjoying his time in the limelight this past year as he revels in his successful career. This year, he has released several new singles, including “Soso Badniss” and “Sloppy Queen.” His new album, Crocodile Teeth, is also on its way on October 15th. The remix of his track, “Crocodile Teeth,” featuring Nicki Minaj, has also gained a spot on the Billboard 100 Charts. Johnny Wonder, overflowing with joy for his accomplishment, even went so far as to publish a photo of himself holding the plaque with the comment “Billboard b**ches” on Instagram.

Johnny Wonder told The Gleaner the time of the remix’s release that “Crocodile Teeth’ had “already blown up before they (Nicki’s crew) wanted to get on it,” and based on his popularity in January, he was correct.

With over 7.26 million views over the previous 28 days in January 2021, the deejay took the #1 place on YouTube’s Music Charts and Insights for Jamaica, with ‘Crocodile Teeth’ being one of the top five most played songs in 2020.

Amongst all his accolades, he has remained humble in the eyes of the music world and his fans. The young deejay even earned the admiration of one of the biggest names in dancehall, Vybz Kartel.

He also mentioned one of his major sources of inspiration. “Vybz Kartel, in terms of his music means a lot to me. And I mean him go as far as fi inspire mi fi do music,” Skilli said.

The legendary Dancehall artiste, Kartel, had something to say about the young artiste. “Me proud a Skillibeng yow! Man humble and nah fumble!” says Kartel, praising his abilities. He also had congratulations for the producer, Johnny Wonder and hail him as a pioneer in the dancehall world. 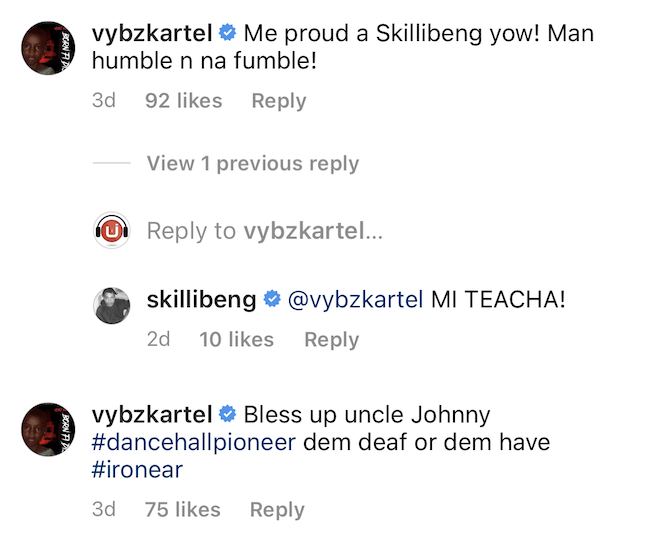 Skillibeng responded to Vybz Kartel’s praise with a sense of pride for the acknowledgment from one of his role models. “@vybzkartel Mi Teacha,” the Eastsyde deejay wrote.

Fans will have exciting weeks ahead with the new album just on the horizon. Crocodile Teeth album will feature 12 tracks with many big names such as Bobby Shmurda, Rich the Kid, Lil Zack, English rapper Stefflon Don, and Jamaican dancehall stars Popcaan, Spice, and Davianah.